Taken from the Spring 2008 edition of Samachara, the magazine of the Gurkha Welfare Trust, comes this short article about the organisation's involvement with the surviving veterans of 3/2 Gurkha Rifle, including two brothers, Ram and Laxman Gurung, who both served with the battalion during the years of WW2.

It is often said that, while a Victoria Cross acknowledges the gallantry of one man, the honour is shared across his battalion. It is only right therefore that we remember Bhanbhagta Gurung's comrades, the battalion of brave men from 3/2 Gurkha Rifles, especially those who now look to the Trust for a dignified old age, befitting of their venerable status. Today, just 18 Welfare Pensioners who served with 3/2GR are still alive with the Trust supporting a further 19 widows.

After the fall of France in 1940, the King of Nepal rallied his tiny nation behind the Allies, doubling the Gurkha war effort. From the hills in the west above Kaski and Gorkha tens of thousands of young men trekked down from their villages to Gorakpur recruiting station in India.

At Gorakpur on a day in October 1940 two brothers stood, eager to fight for the world's freedom. They lined up as they were born into the world: Ram Gurung first, his younger brother by three hours, Laxman behind. The brothers trained in Dehra Dun, before fighting the Pathans on the North West Frontier. When the Battalion headed East, Rifleman Ram remained at Regimental HQ. His little brother was dispatched to Burma. Alongside him was 18 year old Rifleman Manbahadur Gurung who, two years earlier, was just a few places ahead of the brothers in that line at Gorakpur.

In the jungles of Burma the Japanese proved a stubborn and fierce enemy. The terror of 1942 remains with Manbahadur. In one brutal attack, most of his unit were killed. The survivors faced a 16 day trek to safety. Without food rations or supplies to treat the wounded, there was awful suffering and hunger throughout the dangerous journey to Manipur.

With their duty done and the War won, the three men returned home. Sadly, the homecoming was tinged with sadness. The twin's older brother had been tortured and killed by the Japanese.

Life since the War has been tough for the twins and Manbahadur. They each own half an acre of land and a small menagerie of animals which only provides enough food for part of the year. For these old soldiers the Welfare Pension is an indispensable lifeline.

As they did a lifetime ago, these brave old soldiers leave their homes each quarter for a considerable journey by foot. Their destination is not Gorakpur, but Kaski Welfare Centre, from where they collect their pension. They often line up as they once did: Laxman then Ram with Manabadur just ahead. At the front of the line, they will receive a supplement sufficient to ensure they never again have to face the starvation and hardship they once endured.

Each pension payment commemorates a special bond between the people of Britain and the gallant Gurkha solider. In carrying out its work the Trust honours the memory of the courageous men of 3/2GR and their widows, who have sacrificed so much to Britain and the Crown. 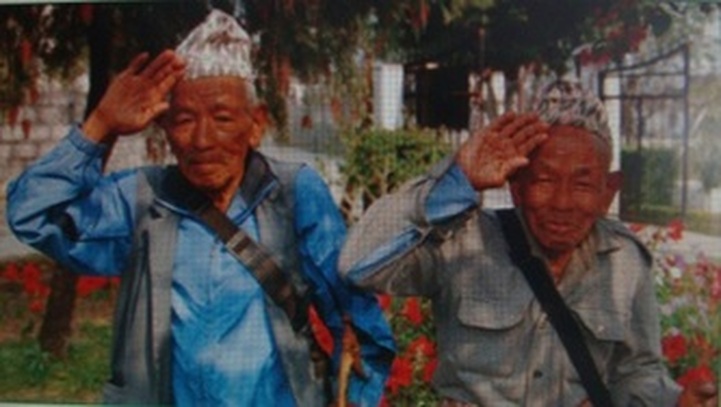 Ram and Laxman Gurung. Laxman (right) was possibly in Column 4 in 1943. Photograph courtesy of the Gurkha Welfare Trust.