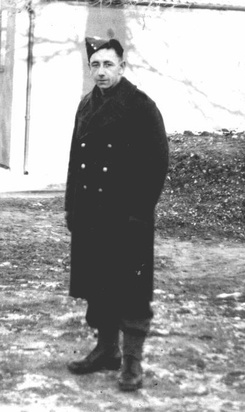 Below are the thoughts and feelings of my Mum Frances, it must have been strange and difficult for her to learn so much about her father so late in the day, my only hope is that it hasn't upset her too much and that it has given her an insight into the man who has been a mystery to our family for so long.

Arthur Leslie Howney was the Dad I never knew. The reason being, that he died in the hands of the Japanese in World War 2, in Rangoon Jail, Burma.

He was serving in the British Army as a Chindit, under the leadership of Orde Wingate.

I was three years old when he died, therefore I never met him, I remember a photo of him in his uniform, which was kept on the sideboard in our home.

Mum was extremely angry for many years and never mentioned anything about that time; it was very hard for her to bring up two young children, an equivalent of a single mother with no help. No such thing as the Welfare State at that time, but she always made sure we had food on the table and a roof over our heads.

I never felt deprived of love and affection, she was both Mum and Dad to us. As I got older I did wonder what it would have been like if Dad had come back home. There are stages in one’s life, such as when I got married, when he should have been there, also when I had my children.

My only regret is that I should have spoken more about Dad before Mum passed away.

Due to my children exploring the family tree, and finding his Army records, in March 2008 we decided to visit Burma ourselves with the British Legion. I was aged 68 before I visited his grave for the first time, it was a very emotional for all four of us, I felt it was the nearest I had ever been to him.

Photographed below is my Mum, Nan and my Mum's younger brother Arthur. Nan looked after her young family with great courage and was a wonderful role model for all of us. The other photo is of Grandad in his Sunday best, he was a painter/decorator in his civilian life, but must of felt it was his duty to contribute to the war effort and so enlisted in to the British Army on the 19th December 1940.
The final two photos are of my Nan and then of my Mum, both taken by Grandad's grave in Rangoon War Cemetery, but some 20 years apart. Nan was given the chance to visit Burma by the War Widow's Association in conjunction with the Royal British Legion in 1987, while Mum travelled to Rangoon in 2008. I can only imagine the emotions that they experienced on those two days, but feel sure that both drew great comfort and reward from their time so near to where he fell.
Update 20/09/2012.

My Mum lost her brave fight against lung cancer on Thursday the 20th September, my family and I are completely devastated to lose such a wonderfully exuberant and loving lady at such an early age. I had hoped that Mum might meet up with some of the other Longcloth Chindit daughters, especially those belonging to the last group of six in granddad's dispersal party, but sadly this was not to be.

Sadly, my maternal uncle, Arthur Howney (granddad's only son) passed away on the 14th June this year, he was 75 years old. Uncle Arthur was a lovely, bright, generous and thoughtful man, who possessed such a wonderful sense of humour, which would infect all around him. He was certainly a fantastic uncle to myself, my sister Denise and my brother Marc. Perhaps my one over-arching memory of him from when I was a child, was his speedy arrival at our house on Christmas Day and being the keenest of all of us to open up the presents. He would then spend the rest of the day playing with the various games and toys with us. We will all miss him very much.

The photographs below show my Mum and Uncle Arthur playing to the camera sometime after the war had ended and Arthur posing under my apple tree back home in 2008. 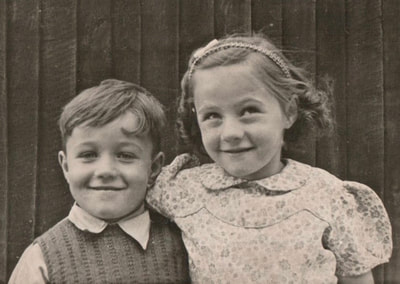 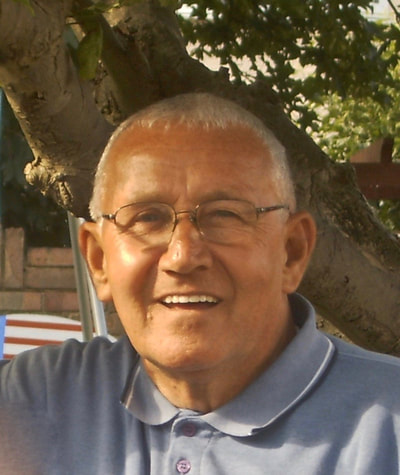 The Results of Some Hard Labour

I was thinking about my research recently and how it has developed over the last ten years or so. Obviously, I never envisaged when I first started back in 2007, that my efforts would lead me to produce this website, or that I would have been involved so deeply with the Chindit Society and come to know so many Chindit veterans. If I remember correctly, I had always hoped firstly to discover what had happened to my maternal grandfather in 1943 and perhaps have him mentioned in some way in a Chindit book or writing.

This was achieved back in 2010, when author Philip Chinnery included mention of grandad in the Acknowledgements page of his book, Wingate's Lost Brigade.

I have often wondered whether grandad is mentioned somewhere on a WW2 Memorial, perhaps in a church near to where he grew up in Hampstead or Kilburn. I always liked the idea that he was remembered back home in London and not just in Rangoon War Cemetery in Burma, and so far away from his family. This was remedied for me, when I was delighted to be told in 2015, that the Chindit Society had included his name on one of their memorial plaques, placed adjacent to the main Chindit Memorial at the National Arboretum in Staffordshire.

The culmination of my involvement with the Chindit legacy came this year (2018), when I had the amazing honour to march with eleven Chindit veterans in the main Cenotaph Ceremony at Whitehall. All eleven of the Chindts had served during the second Wingate expedition in 1944, Operation Thursday. For this reason, I felt that I had the honour of representing the soldiers from Operation Longcloth and this made me extremely humbled, but at the same time very proud indeed. I wonder what my Nan, Bella Howney would have thought of it all?

Seen below is a gallery of images in relation to the above events. Please click on any image to bring it forward on the page.
​ 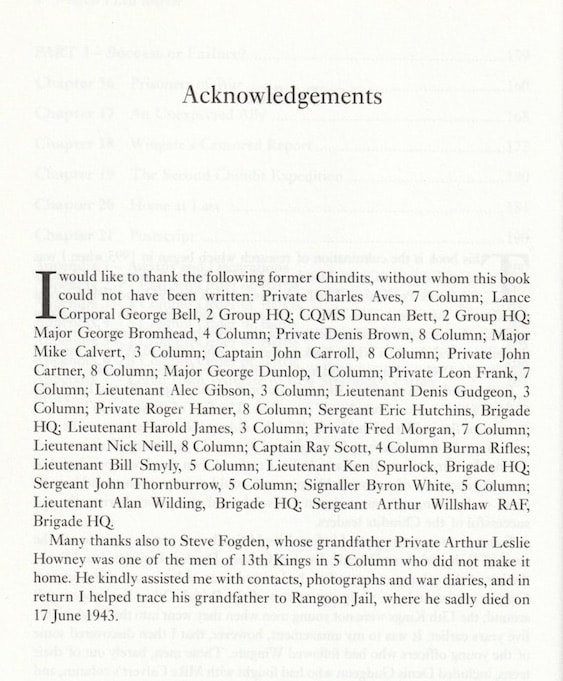 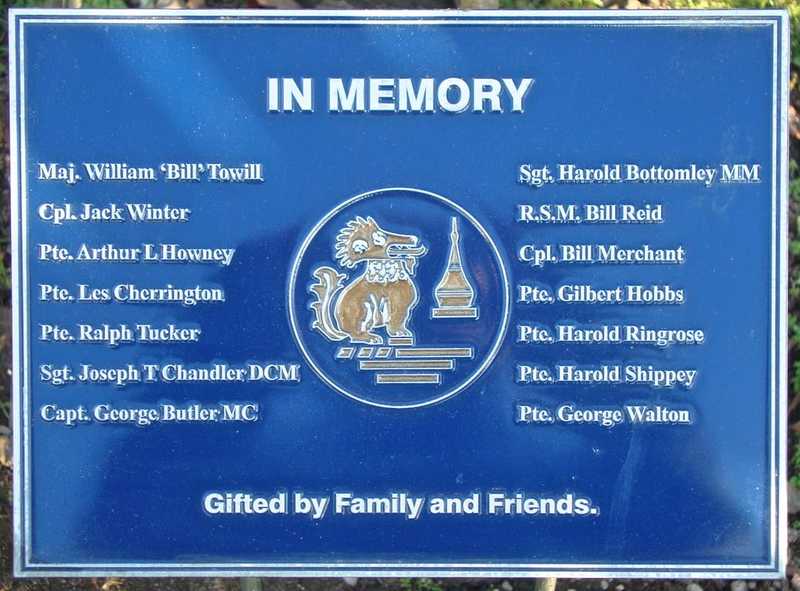 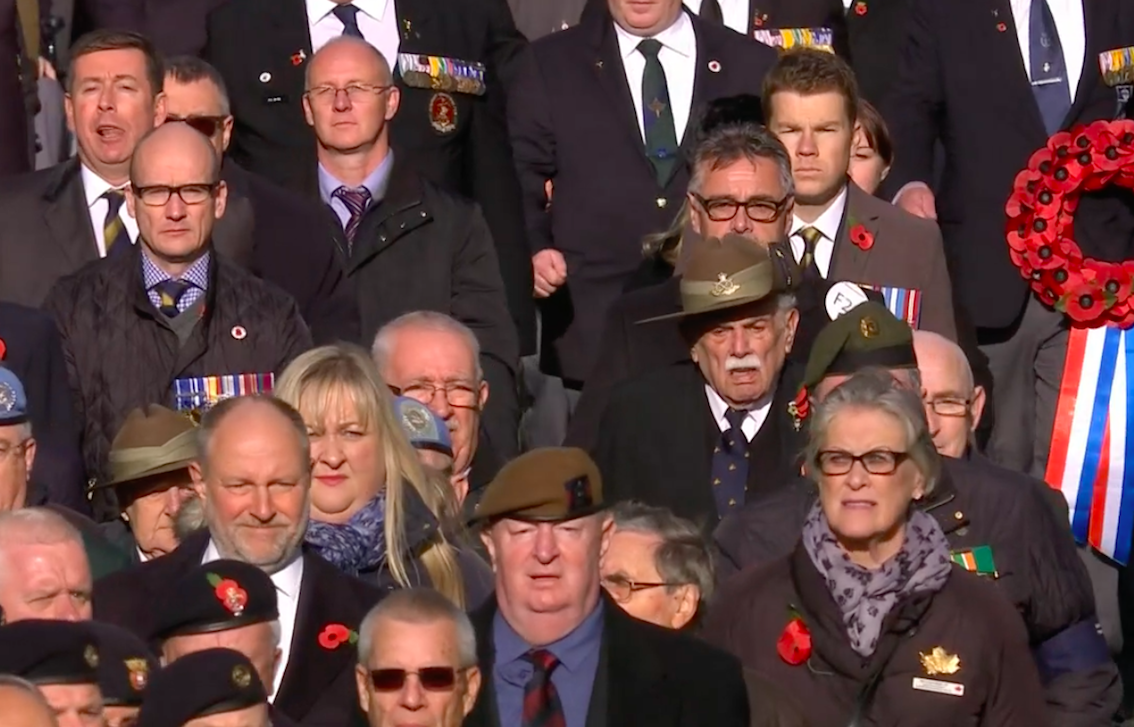 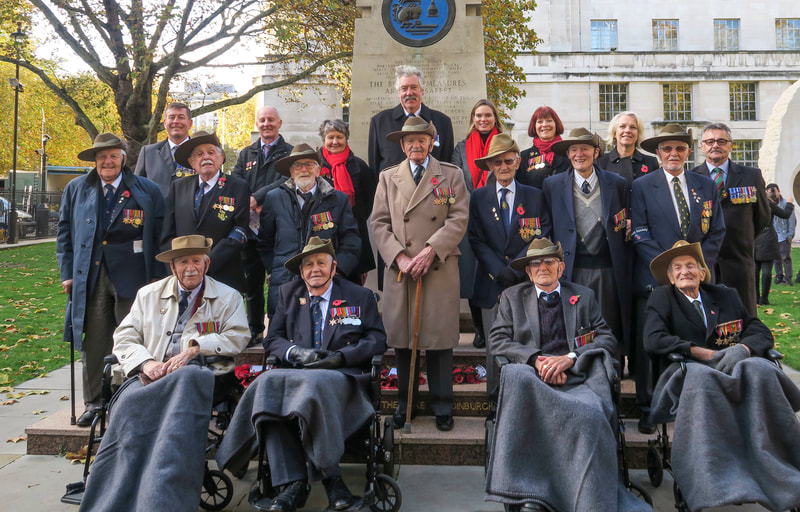 On the 29th May 2020, my father, Denis John Fogden passed away. Although he missed our family pilgrimage to Burma back in 2008 for health reasons, I did not want his support and encouragement in relation to my website and research into my grandfather to go unmentioned. It was Dad who pulled me to one side in late 2007 and asked me to take my Mum with me on my pending trip to Burma. In the end my sister, brother and Mum all came with me and what an unforgettable trip that turned out to be.

Dad was no stranger to the Far East however, having spent two years in Malaya in the mid-1950s whilst undertaking his National Service and then later on spending long holidays in Singapore, Borneo and Malaya with Mum in the 1980's and 1990's. There is no doubt in my mind, that Dad's National Service in Malaya was a major influence and factor into the man and father he would turn out to be and although those final months we had with him in 2019-20 were extremely tough and tinged with sadness, it did enable us to chat with him about his younger years and the experiences he had enjoyed back then. My father, like many I'm sure, was the strong and dependable leader of our family, a no-nonsense man who managed to guide you quietly along, sometimes without you even realising that this was the case.

Dad served in Malaya with the R.A.O.C. and on occasions escorted field guns and ammunition by train from one end of the country to the other. He told me that he had just five rounds for his Enfield Rifle on these trips and that would not have gone very far if the train had been attacked by the communist insurgents. For his service during the Malayan Emergency, Dad was awarded the General Service Medal (QEII) with Malaya clasp, something that I treasure in my medal collection to this day.

Seen below is a gallery of images in relation to my father and his service in Malaya, including photographs of him on the troopship voyage to the Far East after his enlistment at Feltham in February 1957 and one of the transport trains he guarded all those years ago. Please click on any image to bring it forward on the page. 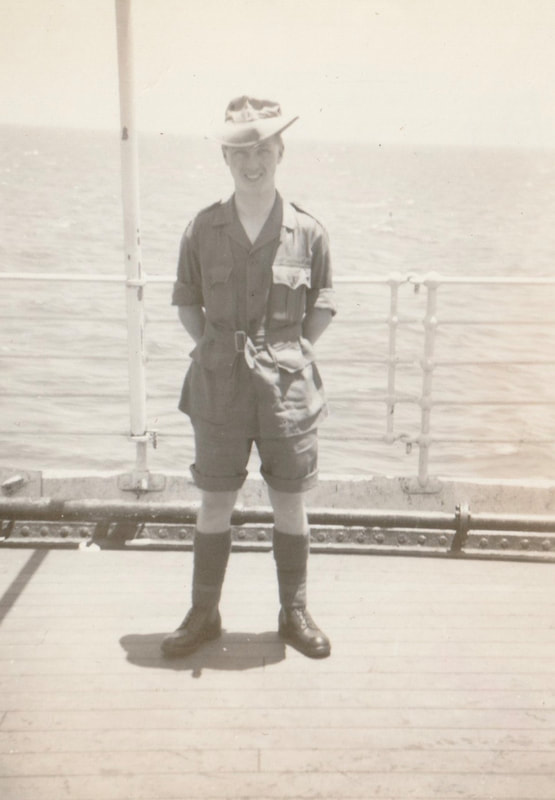 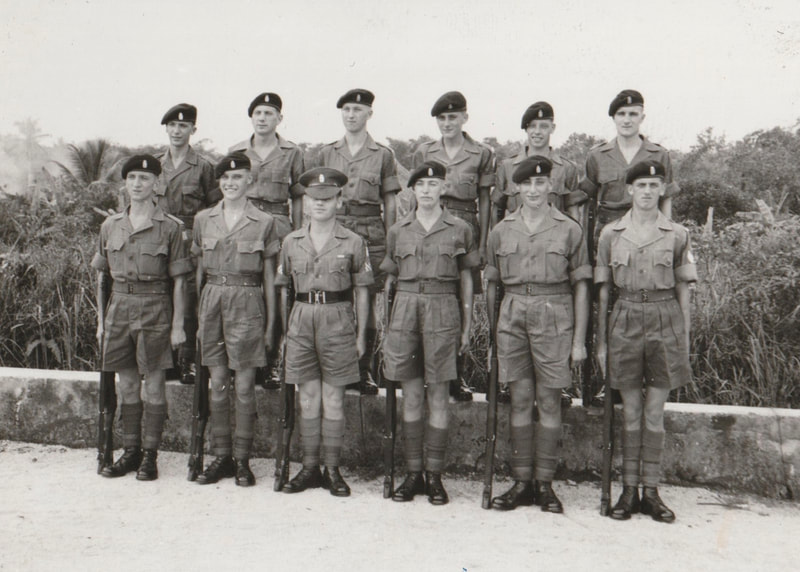 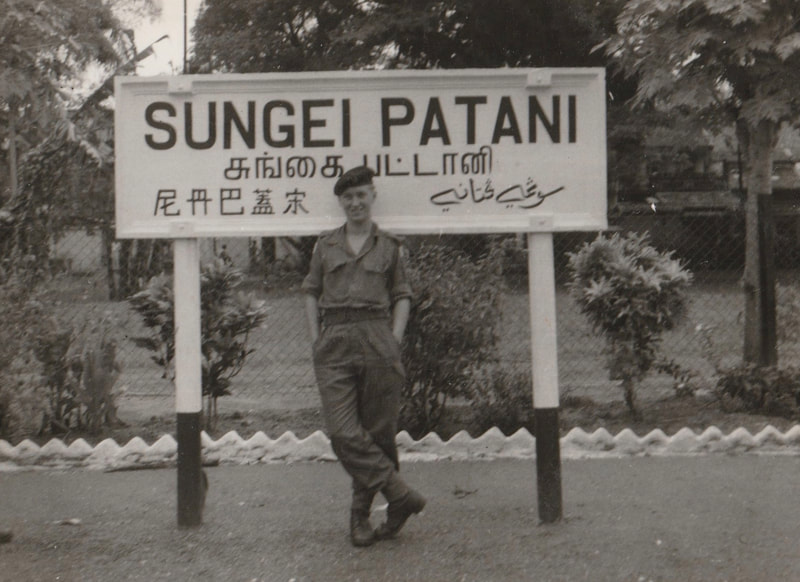 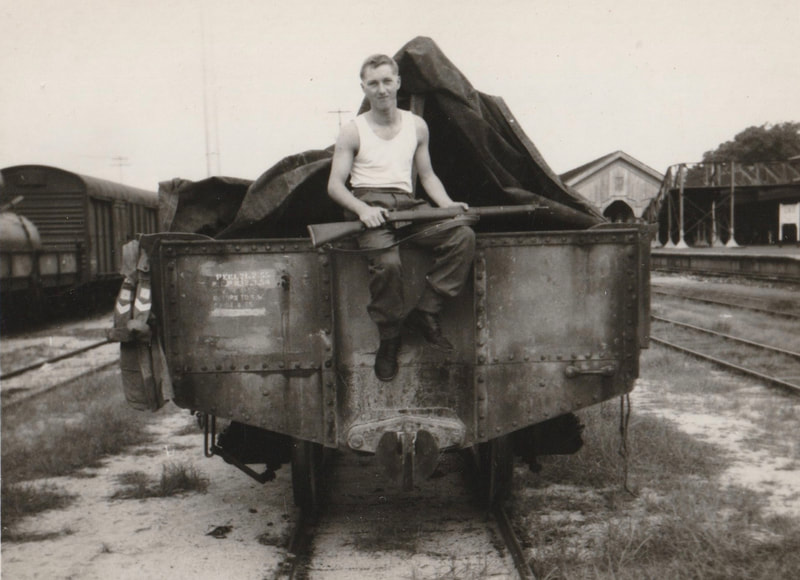 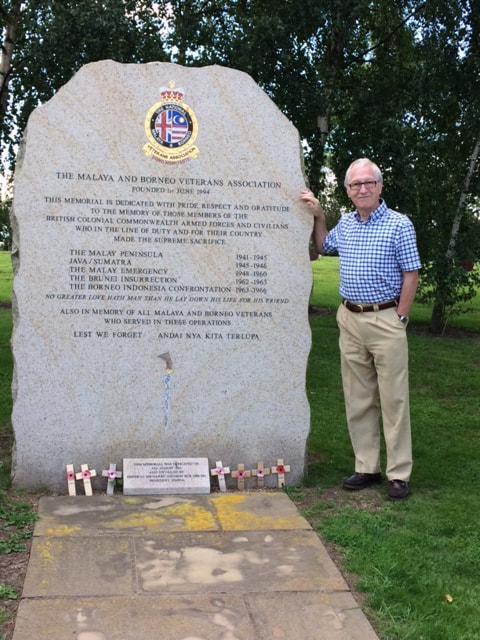 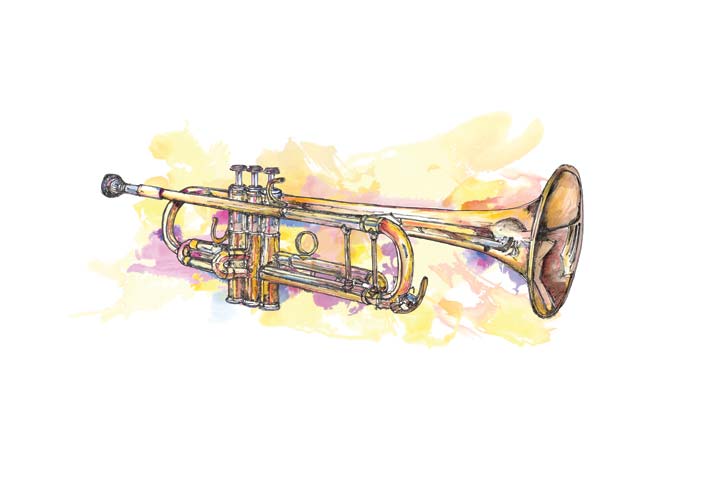