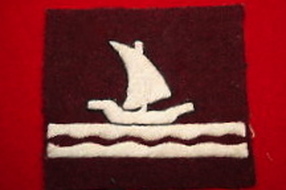 The Divisional formation badge for the Sind District.
On the 28th February (2015) I stumbled across the following post on the WW2 Forums website:

I wonder if anyone can help?

My grandfather served in WW2 in the Army in Burma.

I have a picture of him and there appears to be badge (cloth) on his arm. I can't seem to find out anything about it though, or what it signifies. He served with the Chindits in the 13th King's Regiment. I also know he spent some time in India.

Any help would be much appreciated.

Forum member 'Charpoy Chindit' identified the badge (seen above) as the British Indian Formation badge for the Sind District, which is where the 13th King's went after Operation Longcloth was over.

The enquiry had been made by the granddaughter of Edward John Roberts, a former member of the 13th King's Liverpool and survivor of the first Chindit expedition in 1943. I replied to Lauren's post and added another photograph to the thread, showing another soldier from the 13th King's, Sergeant Dennis Brown. Sergeant Brown's portrait also featured the Sind District Formation badge on his uniform just below his King's Regiment insignia. Keen to find out more about Edward Roberts, I directed Lauren to my website pages.

Steve, I have viewed your website and found it extremely interesting. I also managed to locate my grandfather (and one of his friends) on the attached group picture of the 13th King's Brigade Head Quarters. Without everyone's help on the forum, I would not have ever seen this photograph or learned about where it was taken.

My grandfather is on the third row (from the bottom) - 2nd on the left. His friend, James (Jim) Howes is on the fifth row (from the bottom) - 1st on the left. He was from the London area. Although we cannot locate him on the photo, my grandfather also remained friends with an Ernest Ruddock (not sure of the spelling) who served alongside him in the 13th King's in 1943.

As you might imagine I was extremely pleased that Lauren had recognised her grandfather, Edward Roberts and his friend, Jim Howes from the photograph on my Roll of Honour page. It was the first time that anyone, other than the officers had been identified from that photograph which was given to me by the widow of the battalion RSM, William Livingstone.

Up to this point, I had not come across Edward or Jim during my research and there had been no mention of either man in any books or diaries in relation to the 13th King's. This of course, is quite normal for those soldiers who survived Operation Longcloth and returned safely to India. However, there had been a mention of a Pte. Ernest Rubbock, who was a soldier in 7 Column in 1943 commanded by Major Kenneth Gilkes. I remarked to Lauren that:

I am fairly certain that Pte. Rubbock is your grandfather's friend from back in Burma. It is difficult to say for sure that this would mean that Edward was also in Column 7 as so many men were posted all around during training. The general rule was that the men from C' Company of the original 13th King's in 1942 made up Column 7 in training. Does anyone ever recall your grandfather mentioning escaping via China as this would make it more likely that he was with Column 7.

Lauren told me that no one in her family ever recalled Edward mentioning China, or having exited Burma in that direction in 1943.

Seen below are some of the images mentioned above; including a portrait of Edward Roberts showing the Sind District Formation badge and the Brigade Head Quarters photograph sent to me by Georgina Livingstone in 2009. Please click on any image to bring forward on the page. 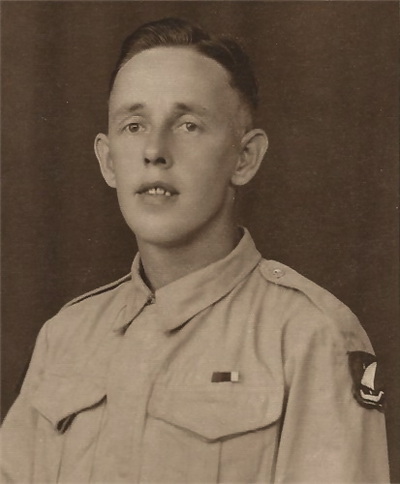 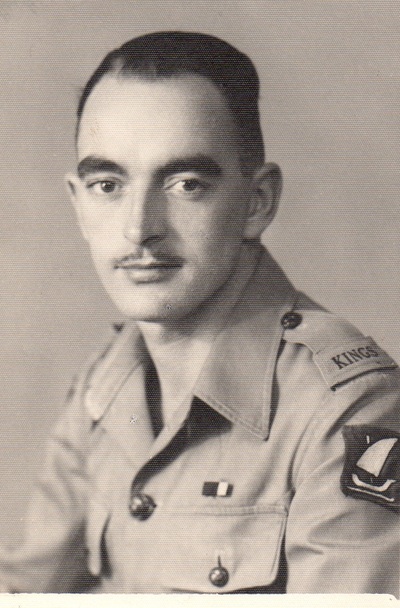 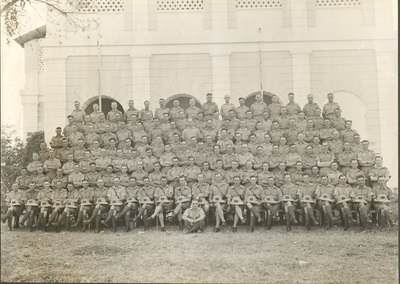 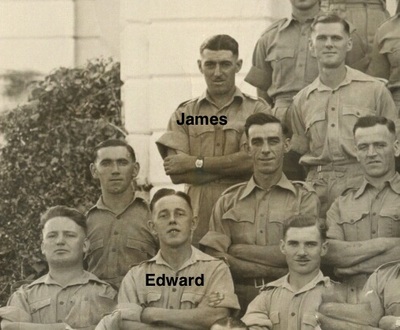 Lauren told me that:

My grandfather was born in Buckhurst Hill, Essex on 9th May 1913. His own father was Ernest Roberts who worked as a Railwy Foreman and his mother was called Elizabeth Annie. Edward lived all of his life in Buckhurst Hill, working as an electrician. He married Cicely Irene Farman from Great Yarmouth in December 1937. They had two children; Sheila (my Mum) and her brother Colin.

My Mum can't recall granddad going to any Burma Star reunions after the war, however he remained friends with James (Jim) Howes and Ernest Rubbock until his death on 7th November 1976.

They had remained friends because they all lived within close proximity to each other after they returned home from India; Ernest Rubbock in Janeway Street, Bermondsey (London) and James Howes off of Forest Road, in Walthamstow (East London). My Mum said that they all used to go on holiday together - my Mum went on holiday to Corfu with James and his wife, Gwen, and I became good friends with their children, Pamela and Graham. As far as my Mum can recall, Ernest Rubbock never married or had any children.

After talking to my Mum this week, she recalls being told the following:

My Mum also spoke with her brother recently, who told her a story about Jim Howes being ill in hospital suffering badly from the effects of malaria. The Gurkhas had come to relieve the 13th King's and the troopships had come to collect the men. My Granddad refused to leave without James and subsequently went to the hospital to get him. Unfortunately, Jim was in such a bad way that Edward ended up carrying him on his back all the way to ship. Obviously, they both got home safe and sound.

My Uncle also told us stories of how Jim could apparently sleep through any weather (including the monsoon) propped up against a tree, much to the annoyance of Edward who couldn't sleep at all. And how Edward and James shed a few tears when their mule went over the edge of ravine, taking all of their precious tobacco and supplies with it.

My Uncle is going to send me my granddad's medals, including his Burma Star. I have sent you a photograph of Edward and James from a family holiday they had in Corfu. I hope all of the information here is of interest, I am so very pleased to have seen your website and learnt more about my granddad's involvement in WW2.

As you might imagine, learning about Edward Roberts and James Howes and their experiences in Burma and India has been of great interest to me. It is wonderful to think of the history shared between these men and that they kept their friendship going for so long after the war. It says a great deal about comradeship forged in the face of adversity and what a strong bond this creates.

I would like to thank both Sheila and Lauren for their help with this story and for permission to use their family photographs on these website pages. Seen below are some more images related to this story, please click on any image to bring it forward on the page. 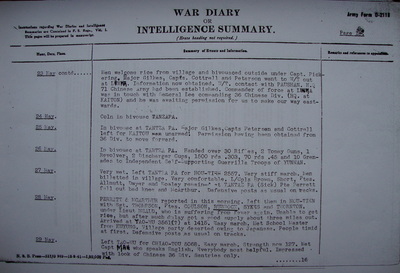 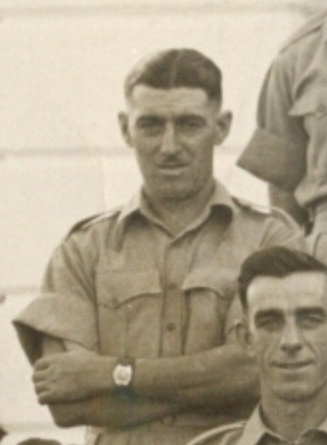 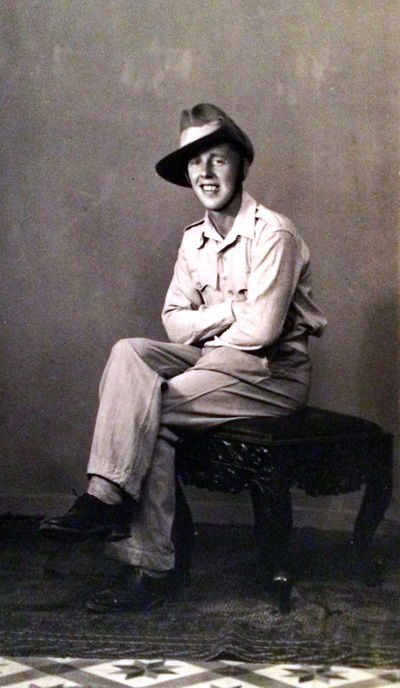 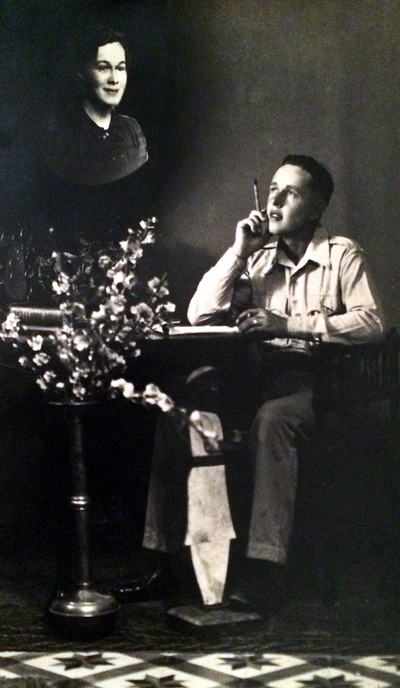 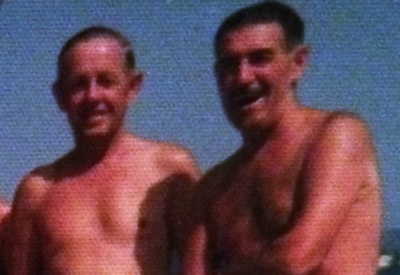