John Fleming Gibson was to my knowledge the only American national to take part in the first Chindit Operation, at least that is, with his feet on the ground. He was given the nickname 'Carolina' presumably due to the fact that he came from the state of South Carolina on the south-eastern Atlantic coastline of the United States. John, in order to become involved in WW2 had travelled north to Canada, where he was enlisted into the Royal Canadian Air Force. After attaining the rank of Pilot in September 1941, he joined 17 Squadron at their British base just as they were preparing for their move overseas.

Unfortunately, I do not possess a photograph of John (also known as 'Jack' and in the reference below 'James'), but he is mentioned in some books and diaries in relation to Operation Longcloth. He took part in an early reconnaissance mission for 77th Indian Infantry Brigade, when he joined a small party of officers commanded by Lieutenant-Colonel L.G. Wheeler of the 2nd Burma Rifles. From the book Wingate's Raiders, by Charles J. Rolo:

"Three days before the main body left Imphal Wingate had dispatched an advanced party under Lt. Colonel Wheeler, commanding officer of the Burma Rifles, to reconnoitre the crossing and establish a bridgehead on the east bank. With Wheeler was Flight Lieutenant Robert Thompson; at 27 years old Thompson had already covered a good deal of ground in the Far East and he was to be of great assistance to many of the other liaison officers over the coming months in Burma. Also in Wheeler's group was the only American in Wingate's mob, Flight Lieutenant James Gibson, known as 'Carolina'. Tanned a reddish-brown, with blue eyes, fairish hair, and a deceptively debonair appearance, he was Hollywood's idea of how a fighter pilot should look.

Gibson had joined the RCAF at the outbreak of war, helped to knock the Luftwaffe out of the skies over Britain, and was transferred to India in time to discourage the Japanese nuisance raiders from venturing near Calcutta. With a large bag of Zeros to his credit, he had volunteered for the Wingate expedition. "I'm sick of shooting down Jap planes," he explained. "I want to see the little devils faces when they finally get it."

The third RAF Officer in the advanced party was Flight Lieutenant Denny Sharp, a New Zealand born Hurricane pilot who had fought in Malaya, before escaping through Sumatra, and later had taken a high toll of Japanese planes in the enemies disastrous large-scale raid on Ceylon. He looked like a cross between a Commando and a hill-billy with his floppy hat, untrimmed black moustache, and four day old beard. All three were to be vital in linking the sky to the ground on the operation proper."

Seen below are photographs of both Robert Thompson and Flight-Lieutenant Denis Sharp, taken before their service with the Chindits. Please click on either image to bring it forward on the page. 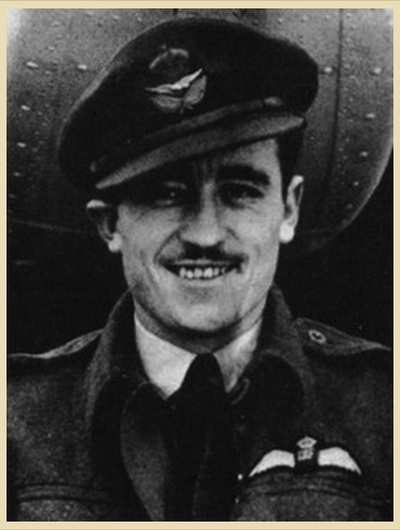 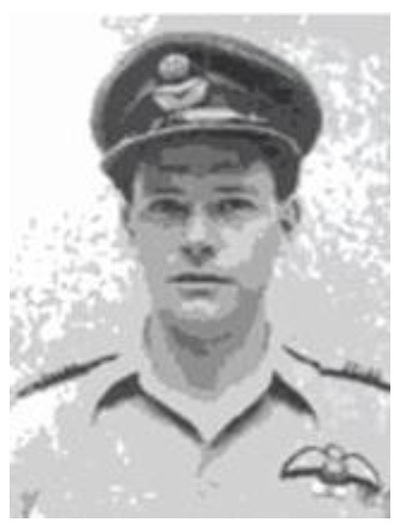 John Gibson returned across the Chindwin in early February 1943 to take up his post as RAF Air Liaison Officer for Chindit Column 4. This column was commanded by Major Conron of the 2nd Gurkha Rifles and would form part of the Northern Group on Operation Longcloth. I am unable to identify the source of the next recollection concerning Flight-Lieutenant Gibson, however the officer remembered:

After we had all crossed over the Chindwin we commenced our march to the Burmese town of Myene, which was about fifteen miles east of the river. It was at Myene that we took our first supply drop and tested the skills of our RAF Officer, Flight-Lieutenant Gibson from South Carolina in America. It was always a humorous moment when 'Carolina' took charge of proceedings, rarely without an acerbic comment alongside. I remember him complaining a few days later as we approached the village of Tonmakeng, the location of our second and largest drop:

"My feet are sore from marching, my seat is sore from carrying, Oh Lord, give me my wings once more!"

Column 4, a mostly Gurkha based unit, were used by Brigadier Wingate as a forward probing force, often sent ahead to test the prospected area for enemy patrols or garrisons. In early March the column were close to the Burmese town of Pinbon, here they were ambushed by the Japanese and suffered badly as a result. Much of the column dispersed in a westerly direction and returned to India the way they had previously come. Brigade Major George Bromhead, who had recently replaced Major Conron as its commander, explained later that the column had no choice but to return west:

"We met a Jap patrol and although we beat them off our only radio got a bullet. Since the Japs used soft-nosed bullets it was the end of that radio. The column was split by the encounter, but all reached the RV that evening and we sat down to consider our situation.
No communications, little food and no way of getting more except courtesy of the locals, and the British Officers of the Gurkha Column reported very poor morale. What to do? We could not influence the war, so I decided to turn back. At this point our luck changed a bit. A villager told me that at the top of a steep hill behind the village there started a forest boundary trail, going, roughly, the right way.

The hill was certainly steep, but the Gurkhas with their kukris cut steps for the mules and we all reached the top. And there was a well marked trail and I could recognise the forest blazes. We managed to buy enough rice and had an uneventful march back to the Chindwin. I mapped the route and by coincidence a battalion of my regiment (the Royal Berkshires) used most of it later when Burma was invaded. On the way back my main worry was that we might be mistaken for the enemy by our own forces. Fortunately we spotted a British patrol east of the Chindwin before they saw us and made contact." 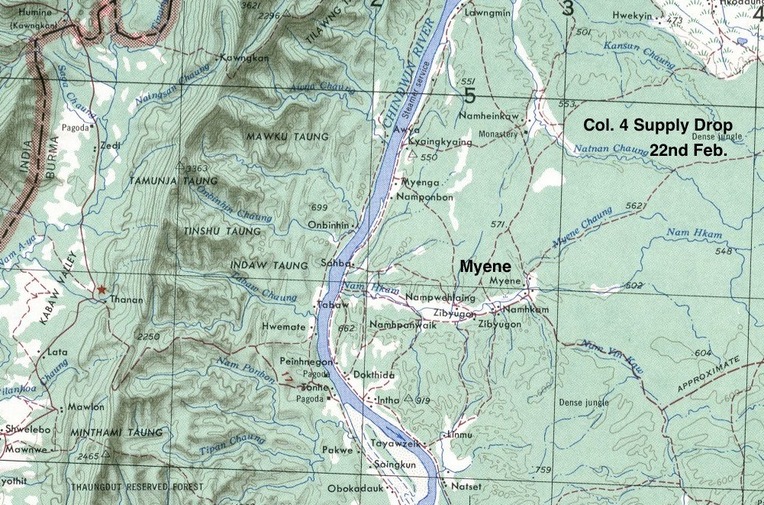 Map of the area east of the Chindwin River, near the town of Myene. This was the location of Col. 4's first supply drop.
Some of Column 4's personnel did continue on eastwards after the action at Pinbon. Lieutenant Stuart-Jones and his Gurkha Platoon eventually met up with Column 8, with whom they spent the rest of the expedition. It is unclear if John Gibson went on with one of these splinter groups or returned with the main body of Column 4 to India. There is anecdotal testimony that he joined up with Wingate's own Brigade HQ after the ambush and remained with this group until the failed Irrawaddy crossing of the 29th March. Sadly, there is no documentary evidence to corroborate this story.

There is no doubt however, that John 'Carolina' Gibson was one of the more colourful characters to serve with the 77th Indian Infantry Brigade in 1943. Here is a brief résumé of his flying career:

RCAF: Enlisted at Toronto on the 9th September 1940. Graduated and attained the rank of Sergeant on the 6th January 1941.

Britain: Trained at Operational Training Units 55 (Aston Down) and 61 (Heston). Attained the rank of Pilot on the 8th September 1941. Joined No. 17 Squadron in September 1941 and travelled overseas to India, flying Hurricanes out of Mingaladon Aerodrome located just outside of Rangoon city, up until the Japanese took control of the area in late February 1942. Promoted to Flight Officer on the 1st October 1942, having been involved in protecting Allied Forces in the retreat from Burma and the Japanese air attacks on Calcutta and Ceylon. John was attributed with at least two confirmed kills of enemy planes during this period.

After the Chindit operation he was technically attached to 14 Squadron and due to travel to the Middle East theatre. It is not clear if he ever made this journey and by July 1943, John had transferred to the USAAF, with whom he served until the end of hostilities.

John Fleming Gibson was awarded a Mention in Dispatches which was Gazetted on the 2nd June 1943. This date is consistent with awards for services on the first Chindit operation.

Fantastically, within just two days of this story going live on the website, a photograph was found of 'Jack' Gibson taken from his time at No.9 Elementary Flying Training School in the Niagara District of Ontario, Canada. The image (shown below) was sourced from the following blog and my thanks go to the owner of the site for permission to reproduce the image here. Please click on the following link which will take you to the original location of the photograph and some excellent information about No.9 EFTS: http://9efts.blogspot.ca/2012/10/blog-post.html

In April 2018, I stumbled across another photograph of Jack Gibson, this time from the book, Hurricanes Over Burma, by Squadron Leader 'Bush' Cotton MC. The image below depicts Jack Gibson with some of the other pilots from No. 17 Squadron in February 1942. 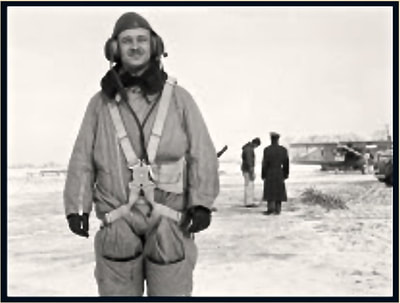 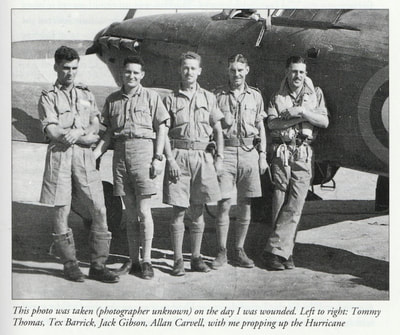