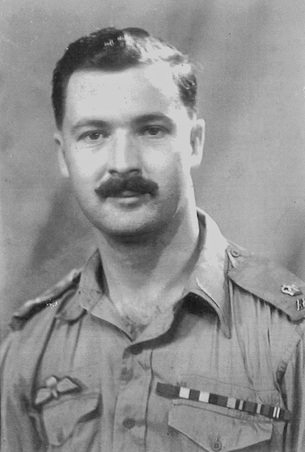 John Burnett, seen post WW2 with the rank of Major and showing his SOE insignia and medal bar.
In mid-May 2015 I received and email contact via my website from the daughter of Lt. Colonel J.S.F.A.F. Burnett DSO MC.

Could you please send me any information you may be holding on my father, Lt. Col. John Stuart Frederick Andrew Forbes Burnett DSO MC, and his time serving with the Chindits in Burma during WW2.

Here is how I replied to Merelina:

Thank you for your email contact via my website. I have not seen any mention of your father being part of the first Chindit operation in terms of being a member of Wingate's actual Brigade, however I am aware that he took part in covert reconnaissance missions to gather information for the Chindit operation in 1943.

He was a member of V Force, which was a Special Forces covert unit made up of British officers usually working alongside Burmese or Indian soldiers and who lived behind enemy lines during the Japanese occupation of Burma in WW2.

There is an article on my website that explains the work of pre-operational reconnaissance on Operation Longcloth in 1943, it can be read here:

There is a map included with the article that shows the area in which your father operated, near a village called Tonmakeng. He would have spent time there reporting on how many Japanese were present, there everyday movements and what equipment they possessed. The area was roughly 30-50 miles inside Burma, but still close to the Chindwin River and the Indian state of Assam. Looking around on the internet, I have found some documents showing your father's progress through the ranks in WW2 and shortly after.

We have his commission notice in the London Gazette, dated December 1940, as you will already know he was posted to the Argyll and Sutherland Highlanders after his officer training period. Then he was sent overseas and joined the Indian Army, being posted to the 10th Gurkha Rifles. We then have his Military Cross recommendation for his work undercover inside Burma with the 3rd Assam Zone section of V Force, which as stated earlier were a top secret organisation attached to the 23rd Indian Division. Also attached are the London Gazette entries for his MC award in 1943, his DSO in 1946 and his promotion to the full rank of Major in 1948.

I hope all this information will be of interest to you. I do not know if he took part in the second Chindit operation in 1944 or gathered more information for this expedition, but is very likely that he could of. On many of the documents mentioned previously is your father's original Army Service number, with this number-162694, you may well be able to send off for his full service records held at the MOD offices in Glasgow, these papers will show you where, when and with whom he served.

John Burnett was from Newmachar in Aberdeenshire, Scotland. His father was Major T.L.F. Burnett of Ardbrecknish in Argyllshire. John was the nephew of Admiral Robert Lindsay Burnett, of Murmansk convoy fame and Air Chief Marshall Sir Charles Burnett.

Lieutenant Burnett was commissioned into the Argyll and Sutherland Highlanders in December 1940. After travelling to India, probably in 1941, he was posted to the 10th Princess Mary's Own Gurkha Rifles and then served with V Force in Burma during the years of WW2. After the war he served with No. 17 War Crimes Investigation Unit in February 1946 and then in December the same year became second in command, with the rank of Major, to the 1st Battalion the Seaforth Highlanders. After service in Malaysia, John and his young family emigrated to New Zealand in 1953, where he reached the rank of Lt. Colonel in the New Zealand Military Forces.

During early 1943, Lieutenant Burnett was involved in reconnaissance work on the Assam/Burma border, including forays over the Chindwin River and into Japanese occupied territory. In January 1943, he was sent across the Chindwin in order to scout ahead for the first Chindit operation and worked in the vicinity of the Burmese village of Tonmakeng (see maps below). Possibly on Burnett's recommendation, Tonmakeng was chosen as the first supply drop location for Wingate's Northern Group, after the fledgling Chindit Brigade had safely crossed the Chindwin themselves in mid-February.

Seem below are two maps showing the areas in which Lieutenant Burnett made some of his reconnaissance's in early 1943. Please click on either image to bring it forward on the page. 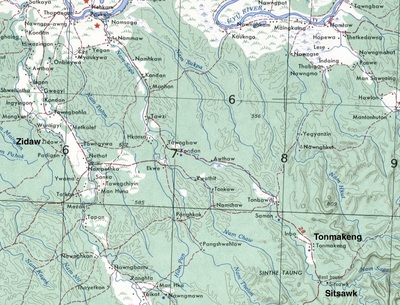 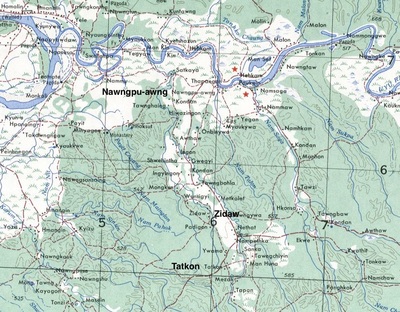 For his invaluable work in January 1943, Lieutenant Burnett was awarded the Military Cross. Here is his official recommendation for this award:

During, and before, the operations on the Chindwin River in the 23rd Indian Division area, Lieutenant Burnett carried out continuous and deep patrolling. Included in his many patrols and reconnaissances were the following:

On all these patrols he was operating far into the enemy patrolled country, and had continually to dodge Japanese patrols to return with his information. The information he brought back was of the greatest value to higher authorities, both military and civil. His reports were most clear and concise. He also brought back many valuable documents.

On his last patrol, a reconnaissance of over 100 miles, ten days across the Chindwin, he made a special reconnaissance of the Tonmakeng area, where a Japanese force was believed to have its headquarters. Apart from much valuable general information, he was able to obtain the exact dispositions of the enemy in the Tonmakeng-Sitsawk area. In all these many patrols and reconnaissance he was operating in what was virtually Japanese controlled territory. The official account of the recrossing of the River Chindwin is given below. This action in itself was deserving of an award.

On arrival in the area of Namponbon (SF 2144) the patrol hid in the jungle to rest while the B.I.C. interpreter was sent into Namponbon village in order to arrange boats. He returned with the answer that the whole village was deserted, and that they had all gone fishing with all the boats left to their disposal. This in itself was suspicious, as usually someone is left in the village. In view of this, Lieutenant Burnett decided that it would be dangerous to go down to Sahpa or up to Myenga, as the suspicious behaviour of Nanponbon indicated the presence of a Japanese patrol.

At 15.30 hrs. the Gurkha Naik, who was one of the sentries, came in to report that he had seen three Japs creeping towards Namponbon village from the south. At the same time a British Other Rank, the other sentry, reported more suspicious movement in the area. Lieutenant Burnett realised that there was a Japanese patrol in the area and that it had got information about the presence of a British patrol.

Bullets were heard to go overhead. The question arose of how to cross the Chindwin. There were no boats, and only Lieutenant Burnett felt sure of being able to swim the river. Two of the others, Major Giles and Naik Singbir were very poor swimmers, whilst the B.I.C. interpreter and the British Other Rank, could not swim at all. The whole party discarded their clothing and equipment, hiding them in the jungle and retained only their weapons, with some thought of getting over on bamboos or branches of trees.

The patrol then ran into Myenga where they asked for boats, but with no success. They grabbed an empty petrol tin for someone to use as a float. About 100 yards north of Myenga they found a small two-man boat overturned near the bank. This was righted, and with the four non-swimmers in the boat, Lieutenant Burnett pushed-off, propelling the boat by swimming. When the water was about chest high, the boat sank. It was brought to the surface again and, with the British Other Rank and the interpreter in the boat and the other officer and the Naik holding on, Lieutenant Burnett again pushed off, swimming and pushing as best as he could.

At any moment they expected fire to be opened up on them. In the deepest part of the river, where there was a strong wind blowing and considerable waves, the boat sank again. Fortunately it came to the surface again. Lieutenant Burnett and Naik Singbir managed to pull the interpreter across the boat, while Major Giles and the British Other Rank held on. With Lieutenant Burnett and Singbir, both by this time practically exhausted, propelling the boat by swimming; the patrol managed to reach the opposite bank.

Major Glies, giving the account, stated that had it not been for Lieutenant Burnett in particular, the crossing could not have been accomplished without the loss of three lives.

As mentioned previously, it is not known if Lieutenant Burnett was involved with the second Chindit force in 1944. He did however undertake many other covert operations in Burma, including in the area around Mandalay in early 1945, when the 14th Army were in the process of expelling the Japanese from the north of the country. On one such mission he was parachuted into the area around the Burmese town of Myogi, just east of Mandalay which at that particular time was the location of the Japanese Army Headquarters. For this and other invaluable reconnaissances, he was awarded the Distinguished Service Order.

The final gallery in this story includes more maps in relation to John Burnett's work with V Force in Burma, a photograph of the first Chindit supply drop at Tonmakeng in February 1943 and a photograph of John after the war in the dress uniform of the Seaforth Highlanders. Please click on any image to bring it forward on the page.

I would like to take this opportunity to thank Merelina for her help in bringing this interesting story to these website pages and for permission to show the wonderful photographs of her father. 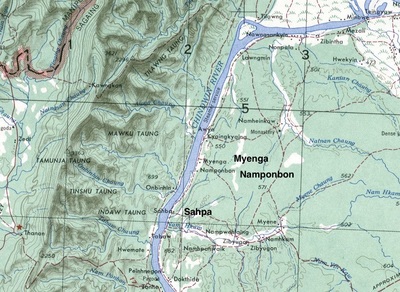 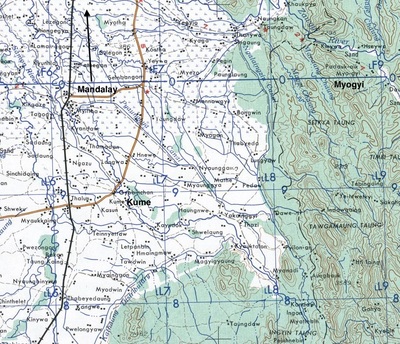 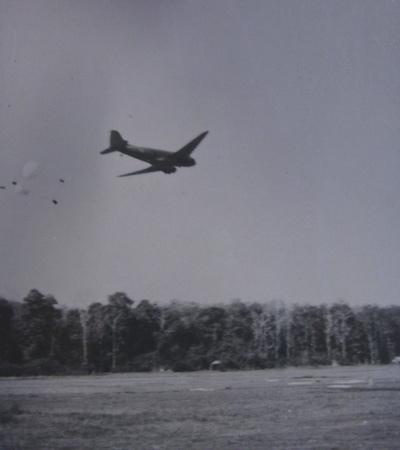 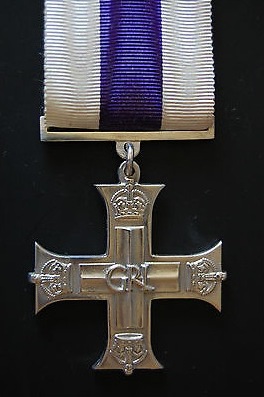 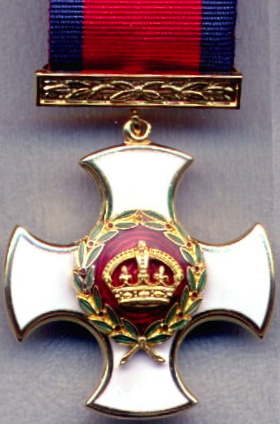 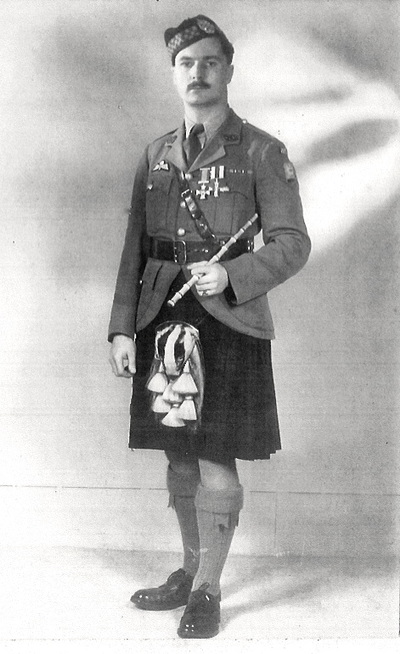