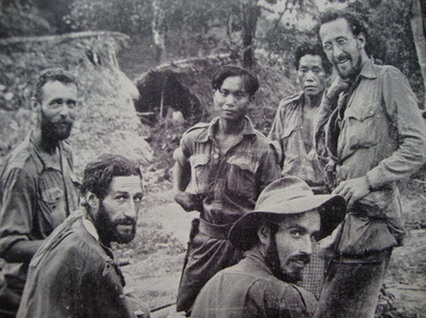 ​Peter Dorans was Bernard Fergusson's trusted batman and friend throughout WW2. Serving with his commander in North Africa with the 2nd Battalion, the Black Watch and then eventually with the Chindits in both 1943 and 1944.

Here he is pictured with his bush hat resting in a Kachin village during the 1943 operation. From left to right you have: Bernard Fergusson, Jim Harman, Peter Dorans and Burma Rifle officer John Fraser.

In the summer of 2009, I submitted the following article for inclusion in the Burma Star Association magazine, Dekho!

To learn more about Corporal Peter Dorans and his time on Operation Longcloth, please read on.

2753451 Corporal Peter Dorans of the Black Watch was born on the 9th January 1914, on the Highland estate of Kilkerran. He travelled for the years 1931-1944 as Bernard Fergusson’s “gamekeeper, batman and henchman”. (Fergusson’s own words). Their exploits took them to many places, including Turkey, Syria, North Africa, Palestine and of course most famously Burma.

Fergusson’s quote “and I owe him my life”, sums up the relationship the two men had during those years and although it refers specifically to the incident at Bonchaung in March 1943, it is for certain that this would not have been the only occasion that Peter had looked out for his Major.

At the railway near Bonchaung, Burma, Chindit column 5 had been busy demolishing the tracks and bridges; this was to be their main objective during operation ‘Longcloth’. During this time some Japanese infantrymen disturbed part of the unit and a firefight took place. Several men and an officer were wounded and Fergusson went up to check on these men before deciding if they were fit to continue the mission.

It was here that a wounded Japanese soldier having feigned death and lying ‘doggo’ took aim at the Major with his rifle; totally unaware of this, Fergusson was startled by the sound of two shots. Peter Dorans ever vigilant had despatched the enemy soldier before any harm could be done to his Commander.

It is not widely known that after being called up as a reservist at the beginning of the war, Peter was captured along with many of his Black Watch comrades (part of the 51st Highland Division) and held as a POW at Saint-Valery, France. True to form, he was amongst twenty or so men that managed to escape their German guards and rejoin the war effort.

Also it is not well known that just before he rejoined Fergusson for training with Wingate’s 1943 Chindits, he was attached to the Parachute Brigade.

In India during training and subsequently on operation ‘Longcloth’ in Burma, he supported Fergusson’s command of column 5. It is true to say that without his trusted Dorans and also Adjutant Duncan Campbell Menzies, Fergusson would have struggled to lead his column during those tough and arduous weeks in the jungle. The Scots influence in 1943 was extremely strong, with many of the officers and leading players hailing from North of the Border.

Dorans and Fergusson kept up many traditions even under the exacting conditions of the Burmese jungle. At Christmas 1942, just before the expedition went in to Burma, these two were found to be the co-brewers of the ‘Athole Brose’ (whiskey), which kept the party going long in to the night, after the last training exercise at Jhansi.

Peter played a strong part in the Hintha engagement; this was the village where Fergusson received his only wound in 1943 and where column 5 met their Waterloo. He was also vital in getting as many of the other ranks in column 5 to attempt to swim across the Shweli River in early April. The crossing was a disaster and over 40 men were left stranded on a large sandbank in the middle of the river, left to be taken prisoner by the Japanese.

Of the men captured on the Shweli sandbank and more generally throughout the 1943 Chindit operation, hardly any lived to return home. They were eventually all sent down to Rangoon Jail, where the majority died within the year.

Column 5 had received only 20 days worth of rations from the Air Supply Drops during an operation that lasted nearly seven weeks. This was mostly down to the ill fortune of being Wingate’s rearguard and turning up just too late on several occasions after large drops had occurred. By the time what was left of the unit reached the Irrawaddy River, on the return journey, the men were half starved.

By some miracle the party stumbled across some water buffalo grazing near a stream, Fergusson ordered his two most trusted marksmen to dispatch the animals. The two were, sabotage platoon leader Tommy Roberts and Peter Dorans.

It is very poignant for me to write about occurrences such as this incident, when it is most likely that my Grandfather took part in the feast, but sadly, still did not make it home.

Peter was awarded the DCM for his efforts in 1943 (see his citation on the Chindits info link below) and then given the rank of Sergeant and his own platoon in the following years Chindit operation, but was still within the 16th Infantry Brigade commanded by Fergusson.

Peter Dorans will always be remembered for his protection and loyalty toward Bernard Fergusson, that and being able to make hot, sweet tea in less than 10 minutes at each column halt in that dreaded jungle. The quotation from ‘Beyond the Chindwin’, Fergusson’s account of the first Chindit campaign, really highlights Dorans attitude toward his role. Speaking to General Wavell on inspection of the Chindits just prior to their entry into Burma, he was asked, “Dorans, what are you doing here”? Dorans replied “just the same as usual Sir, following the Major”!

Also, after Fergusson had received his wound at Hintha and worried that they might have to leave him behind, Dorans and Duncan Campbell Menzies had both agreed to return to collect him, once they had got the rest of the column home safely to India. Sadly, it was Campbell Menzies who did not make it back that year, losing his life while attempting to secure food for the column in the village of Zibyugin.

I have read the majority of the writings about the Chindits of 1943 and there is no doubt that Peter Dorans was an inspiration, not just to his Major, but to all those who knew him. He understood the responsibilities of leadership very well, but never lost sight of the fears and concerns of the ordinary soldier. In the crisis of battle or the fearful darkness of those long jungle nights, it was to him that they often turned.

You can see more about Peter's life by following the link below.

To see Peter Dorans citation for the award of his DCM, click on link below and scroll to that award section.

Above we have photos of Peter Dorans taken in the same Kachin village as the previous image. To the left he attempts to grind out some rice, much to the amusement of the ladies present, to the right posing for a team photograph with some of the men. All the images shown on this page are from the private collections of Flight Lieutenant Denny Sharp and Lieutenant Tommy Blow both of 5th column in 1943.

In June 2012 I met Alf Cossins at the Chindit Old Comrades annual dinner, held at Walsall near Birmingham. Alf and his son Jon had collaborated to record Alf's war service in book form and it is from this record that some further information about Peter Dorans came to light.

In 1944 Alf became a member of Defence Platoon No. 2 in the Head Quarters of Bernard Fergusson's 16th British Infantry Brigade. Here is how he describes the unit and it's duties:

"By the end of January 1944 we had begun our march over the Naga Hills (16th Brigade were the only Chindit Brigade in 1944 to march into Burma). The order of march for HQ Company was Number 1 or Number 2 Defence platoon leading on an alternate basis every other day. Also up front with them would be some of the scouts from the Burma Rifles. Behind this lead platoon would come the Brigade commander (Bernard Fergusson), his batman, the officer second in command and the Intelligence officers. Also present in this lead group were the Signals officer and his section and the muleteers and their charges.

A platoon consisted of: the officer in charge, a sergeant, five or six sections of infantry men and the mules which carried all the heavy equipment. Our first platoon officer did not last very long, but where he went to we were never told. He wasn't replaced and we were now under the command of our sergeant Peter Dorans, who had been with the Black Watch earlier in the war. In the first Chindit campaign he had been in the Kings Regiment and had been batman to the Brigadier. I had got on well with him partly because I had made my name playing football for the Head Quarters back at Ranchi."

(Taken from the book 'Alf's War and Peace', by Alf and Jon Cossins).

It seems that the Scots at War website is no longer in existence and the above link defunct. Thankfully I saved the details, which can be read here:

"At Hintha on 28th March 1943, he was in charge of a small post holding a track along which a new attack was expected. Although he had only a handful of men with him, he considered that he would present a less vulnerable target and a more effective defence with still fewer. He therefore, collected grenades off some of his men and reduced his party to two, besides himself.

When the expected attack came in, carried out by twenty to thirty Japanese, he threw grenades with great effect, carrying on with his rifle when these were exhausted, and completely broke up the attack, which was never resumed in this sector. At least eight bodies were observed to his immediate front, and more might have been seen by daylight.

During the march to the Chindwin, though suffering from fever and other complaints, he remained cheerful as ever and was instrumental in encouraging weaker men not to give in. His fortitude was of real benefit to the whole column. Cheerful and tireless at all times, he was to the fore whether in or out of action, and was of the utmost value in inspiring and controlling young soldiers. He was by common consent the finest NCO in the Column."

He was discharged to the reserves in February 1946, employed as a gamekeeper and as a coal miner. Died 26th December 2000 aged 86.