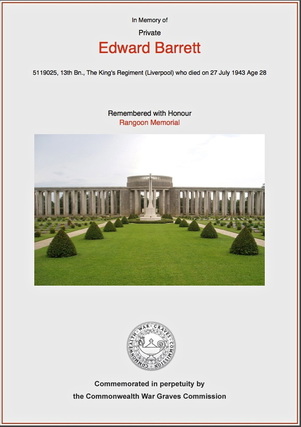 CWGC certificate for Edward Barrett.
Pte. 5119025 Edward Barrett was born during the spring of 1915 in Salford, a borough which makes up part of Greater Manchester. The CWGC website provides no next of kin details for Edward, but we do know that he was originally posted to the Royal Warwickshire Regiment after enlisting into the British Army.

Edward was a member of 5 Column on Operation Longcloth commanded by Bernard Fergusson of the Black Watch; as already mentioned, he was originally with the Royal Warwickshire Regiment, possibly the 8th Battalion and was posted to the 13th King's after arriving in India during the late summer of 1942. He joined Chindit training at the Saugor Camp on the 26th September.

Taking into account the area of Burma in which he perished (Kachin Hills), it is likely that he was one of the 100 or so men from 5 Column, that were separated from the main body of the unit on or around the 29th March 1943. A Japanese ambush at a place called Hintha cut the column in half and the tail dispersed eastward towards the Shweli River. Here they rather fortuitously bumped into 7 Column on the river bank.

7 Column's commander, Major Kenneth Gilkes took them under his wing and allocated these stragglers to his pre-arranged dispersal groups. 7 Column then attempted to exit Burma via Yunnan Province and Fort Hertz. By my estimation and from reading all the missing in action reports for Longcloth, it is probable that Edward Barrett joined the dispersal group led by Lieutenant Musgrave-Wood of the Sherwood Foresters.

Many of the soldiers from 5 Column had fared rather badly for rations during the operation and this was dramatically borne out by the high number of these men who did not make it out of Burma in 1943. The longer and more strenuous route out via the Chinese Borders also took its toll on the already exhausted men from 5 Column.

Company Quartermaster Sergeant, Ernest Henderson was a member of 5 Column in 1943. In February 1944, Ernest gave several witness statements explaining what had happened after leaving Hintha and subsequently on the march out with Column 7. Here is how he described the ambush by the Japanese shortly after the engagement at Hintha:

"I was with number five Column of the 77th Indian Infantry Brigade, during operations in Burma in 1943. The British Other Ranks mentioned were in my dispersal group all the way through the campaign until we made contact with the enemy in a village in Burma called Hintha.

After the action in that village was over, these soldiers were still in my dispersal group, which was then commanded by Flight Lieutenant Sharp of the RAF. We halted and unsaddled our mules so we could go ahead much quicker.

After starting off from that halt, which was approximately 2 miles from Hintha, we were attacked by a Japanese patrol. This caused a gap in the column, but we kept marching for approximately another 4 miles and then stopped, we waited for these people to catch up, but they must have gone wrong way, because they did not rejoin us again. I saw all these men for the last time approximately two and a half miles north east of Hintha. They were all alive, and last seen on 28th March 1943."

In March 2016 on the social media website Facebook, a request for information was made against a photograph (see below) of a British soldiers grave, located in the Kachin Hills. The name, rank and service number on the rudimentary wooden cross were those of Pte. Edward Barrett. There was another grave close by, attributed to an American soldier named G. W. Deas. It is suggested that the photographs were taken by men from the American Special Forces known as O.S.S. or the Office of Strategic Services to be precise. Of course, none of these details can be confirmed.

To read more about the O.S.S. and the original Facebook entry in regards to this story, please click on the following link: Remembering the CBI 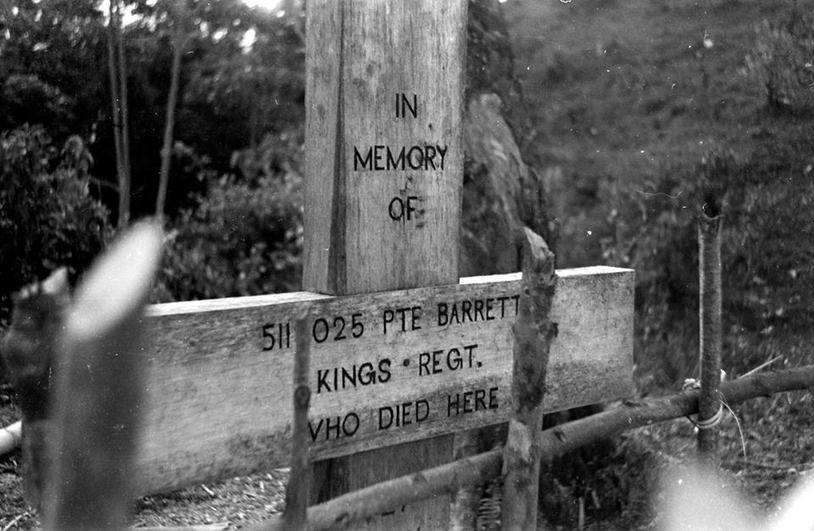 This is reputedly the original grave of Pte. Edward Barrett. The precise location is not known, but it is likely to be a village just to the south of Fort Hertz or Putao as it is called today.
Lieutenant Musgrave-Wood led his dispersal group south, keeping the Shweli on their left hand side, until they reached the town of Myitson, here they turned sharp left where the river meandered eastwards. On the 14th April they found the river less formidable and finally crossed the Shweli near the village of Nayok. They shared this crossing with the dispersal party of Lieutenant Campbell-Paterson, formerly of the Royal Scots. After several skirmishes with the Japanese, the group reached another village called Lewein on the 30th April where they lost several of their number after a further enemy ambush.

According to the missing in action listings for 5 Column in 1943, Pte. Barrett was reported missing as of the 5th April 1943. Alongside his entry on the roll it states: Died at Htingnan on 27/07/1943. This would suggest that he had remained with Musgrave-Wood, almost throughout the Lieutenant's march north through the Kachin/Yunnan Borders in the hope of reaching the British outpost of Fort Hertz.

One witness statement given, which explains the fate of Pte. Barrett, suggests that he fell out of the line of march in early May 1943, suffering from exhaustion and that Lt. W. Roberts of 5 Column informed his family of his death, by sending them a letter in October 1943. A more detailed witness statement, from Pte. N. Thompson sheds much more light on the fate of Edward Barrett:

I was in the same village with Ptes. Carter, Magill and Whiting; I was also with Pte. Barrett, who died later and was buried in Thanatong, about nine days march to the south of Fort Hertz. The villagers betrayed us and the Japanese arrived about ten o'clock one night. Barrett and I were able to escape, but Carter, Magill and Whiting were taken prisoner. I am sure of this because Barrett and I re-visited the village about three days later to get some food and the villagers told us that the Japanese had taken these men away with them. This would have been around the second week in June.

I have not been able to locate the village of Thanatong on any map from the area around Fort Hertz. I have however, been able to find Htingnan, which can be seen on the map in the Gallery below. As you can ascertain from Thompson's report, the men by this time were in a very poor state of health and were meandering around from village to village in search of food and shelter. A days march for men in this condition would not have carried them very far.

Seen below is a Gallery of images in relation to this story. Please click on any image to bring it forward on the page. 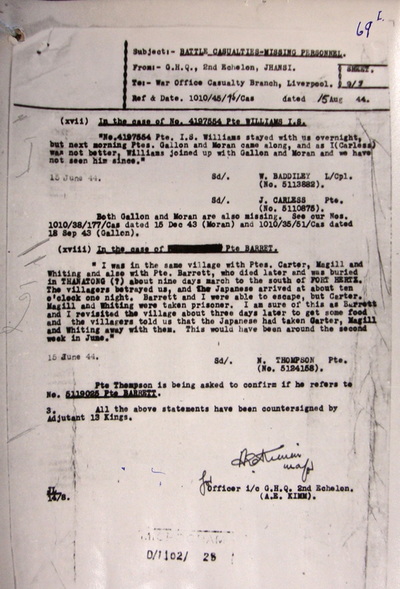 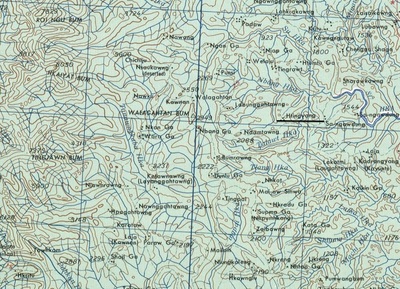 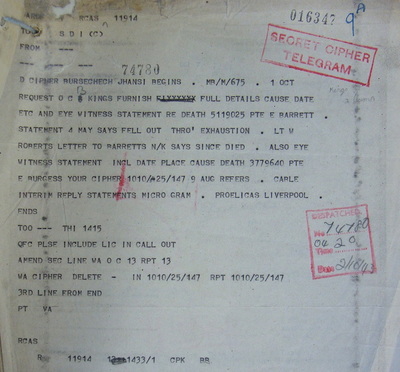 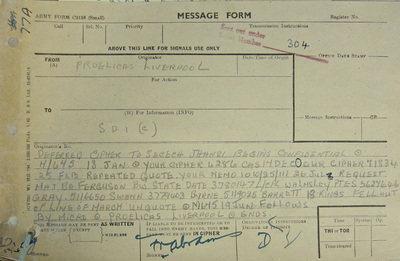 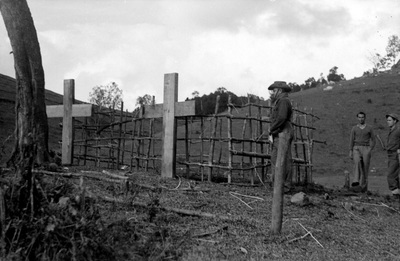 It has been interesting and indeed intriguing to see the image of Pte. Barrett's grave on the Facebook pages. It is quite possible that the photograph depicts the grave site in the village of Htingnan. The existence of the photograph does however throw up several questions in relation to the work of the Imperial War Graves Commission and the Army Graves Registration Unit from the period directly after the war.

Edward Barrett is remembered upon Face 5 of the Rangoon Memorial, located in the grounds of Taukkyan War Cemetery, which is the memorial for personnel from the Burma Campaign who have no known grave. The fact that the American O.S.S. personnel had knowledge of this site, makes me wonder why they did not report it to the British investigation unit, who would then of reclaimed the burial and transported the remains to a permanent cemetery and allocate an identified grave for Pte. Barrett. It is probable that amongst the confusion of those times and the enormous number of investigations required in very challenging conditions and terrain, simply meant that Edward's grave was overlooked. It is also possible, that the unconfirmed nature of such a grave, would not have met the criteria set by the IWGC for proper identification and so his name was placed upon the Rangoon Memorial alongside the 27,000 other inscriptions.

To complete this story, seen below is a photograph of Edward Barrett's inscription upon Face 5 of the Rangoon Memorial and an image of the general panorama around the monument. Please click on either image to bring it forward on the page. 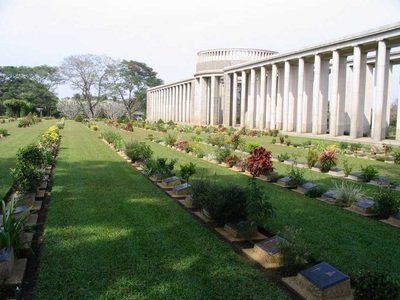