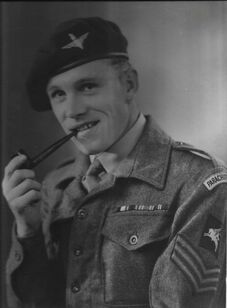 Herbert Poole in 1947.
In early 2008 whilst searching on line for information about the first Chindit expedition, I came across a short story on the BBC's archive, WW2 People's War. The piece, written by H.O.D. Poole and sent to the BBC by the Wymondham Learning Centre caught my eye. Although very brief, the narrative was clearly all about Herbert Poole's experiences on Operation Longcloth in 1943.

In an attempt to find out more and possibly make contact with Mr. Poole, I sent the following letter off to the Wymondham Learning Centre:

I have been researching my grandfather, who sadly died in Burma during WW2. He was in the King’s Liverpool Regiment, which became en-masse the 1943 Chindits. While browsing on the internet I came across your article entitled Life as a Chindit, written by H.O.D. Poole which you contributed to the BBC’s Peoples War website. The date of the contribution was back in April 2005. It was of great interest to me as the soldier who wrote the article would have been in the same unit as my grandfather.

I was wondering if there is anyway of tracking down the author of the article for me and passing on my contact details. I understand that he may well have passed away since then as he would be at least 85 now, and I also realise you may not wish to give out such information in this way. But I thought there was no harm in asking. It would be a wonderful opportunity for me to speak and listen to a man that has had a similar experience to that of my own grandfather in Burma during the war.
Thank you for your attention in this matter, and I hope to hear from you soon. Yours sincerely, Steve Fogden.

Sadly, but not surprisingly an email reply came back from Wymondham thanking me for my letter, but explaining that due to data protection laws, they were unable to pass on my request.

Then in October 2021, I was delighted to receive the following email contact via my website from Ian Poole:

First off thank you for setting up and maintaining this fabulous resource which is proving a mine of information about Operation Longcloth which, I believe, my late father was part of. I wonder if you could help me discover which column he was in?

Like many men of his generation he was always loathe to talk about his war experience and I, as a young man, was too preoccupied to push him further. He always said he was in the Burma expeditionary force and his main recollection was of marching through the jungle seeing nothing but the man in front’s pack! I have read through much of the Longcloth literature and, unsurprisingly given he was a lowly private, have found no mention of him. I would dearly love to discover which column he was attached to so I could get an idea of what he experienced all those years ago in the jungles of Burma.

His name was Herbert Owen Daniel Poole and, according to his war records, he was posted to the 13th Battalion King’s Regiment in Saugor, India on 1st October 1943 as a private aged 20. There he spent a couple of weeks in a military hospital before being discharged on 13th December 1943, no indication why. Unfortunately, the next entry is on the 1st November 1943 where he is in Karachi and is being reclassified to class 1A, fit for service, presumably after recovering from the malaria which was to plague him into later life and, presumably, precluded him from taking part in Operation Thursday.

There is no mention in his records of what he did during the period of Operation Longcloth though he was awarded the Burma Star in 1944. He later joined 15th Parachute Regiment whilst in India before finally leaving the Army in 1950. If you could point me in the direction of any resources which might reveal which column he served in or who to approach for this information then that would be greatly appreciated.
​Thanks again for the wonderful website. Kind regards, Ian Poole.

Ian and I have since exchanged a number of emails trying to build a better picture of his father's Chindit service and have come to the conclusion that Herbert was probably a member of No. 7 Column on Operation Longcloth, although this cannot be confirmed at this rather late stage in proceedings.

Ian has kindly written down a brief summary of his father's life and Army career:

Herbert Owen Daniel Poole was born in Talke, near Stoke-on-Trent on the 6th January 1923. His parents were Thomas Edwin Poole and Mary E. Dunn though he was raised primarily by his Aunt Alice. He lived with her family until, at the age of 14 he was reclaimed by his father, taken out of school and put to work as a gardener. In 1939, with war on the horizon and the prospect of following his father down a coal mine, he enlisted as a boy soldier at the age of 16 with the Loyal Regiment (Army number 3857116), signing up for 9 years plus 3 in the reserve. He spent the first two years of the war in Lancashire with the Loyals before being sent to India. On arrival he was posted to the King’s (Liverpool) Regiment 13th battalion and sent to Saugor in Central India for jungle warfare training with Orde Wingate’s 77th Indian Infantry brigade, later known as the Chindits.

When he entered Burma as part of Operation Longcloth in February 1943 he was 20 years old. From an account he gave to a local researcher some 60 years later, where he recalled marching all the way to China on dispersal, it is probable that he was part of 7 Column, though there is no documentary evidence to back this up. He always claimed that he never fired his rifle in anger throughout the campaign. While in the jungle he contracted malaria which put him out of active service for a number of months and probably precluded him from taking part in Operation Thursday in 1944. He was to suffer recurrent bouts of the disease well into later life.

In October 1944, he transferred to the 1st Battalion of the King’s Regiment at Malthone, India and in March 1945 joined 15th Battalion, the Parachute Regiment there rising to the rank of Acting Sergeant before returning to the UK in early 1946. Back home he joined No.1 Parachute Regiment training centre as a Corporal instructor, initially on the Isle of Wight and later at RAF Bulford. At a dance there he met Grace Doreen Blanchett, a Sergeant in the ATS (Auxiliary Territorial Service), who would soon become his wife when they married at Hendon registry office, London in June 1947. By then he had been promoted to Sergeant and returned to the Loyal Regiment based at the Fulwood Barracks in Preston. Grace subsequently left the forces and retrained as a primary school teacher at Warton Technical College while Danny, as Grace preferred to call him finally left the Army in early 1950.

The young couple relocated to North London, where Grace originated from, and Danny went into the retail sector, originally with the Co-op and then as an independent grocer owning his own shops, first in Watford and later in Berkhamsted, Hertfordshire. In 1958 a first son, Simon, arrived and shortly after, in 1959, a second, Ian. Danny was a keen sportsman playing football, cricket and tennis to a high standard well into his forties and both he and his wife were excellent ballroom dancers.

In his late fifties Danny's health faltered and he had the first of what proved to be three heart bypass operations. As a result, in 1983, he sold the shop and they both retired to Norfolk where they had a bungalow built in the village of Tacolneston, fifteen miles south of Norwich. By this time both their sons had left home and gone to university with Simon emigrating to Australia in 1987.

Despite occasional bouts of poor health they enjoyed a happy retirement circling the globe on five occasions and visiting their granddaughters in Sydney and Cheshire on many occasions. Finally, in 2005, they left Norfolk to live near Ian in Frodsham, Cheshire. It was to prove a short lived move as Danny died in April 2006 followed by Grace two years later. They are buried together in Frodsham Cemetery.
Seen below is a gallery of images in relation to the above narrative, including the original contribution to the BBC's WW2 People's War project from over ten years ago. Please click on any image to bring it forward on the page. I would like to thank Ian Poole for his help in bringing his father's story to these website pages. 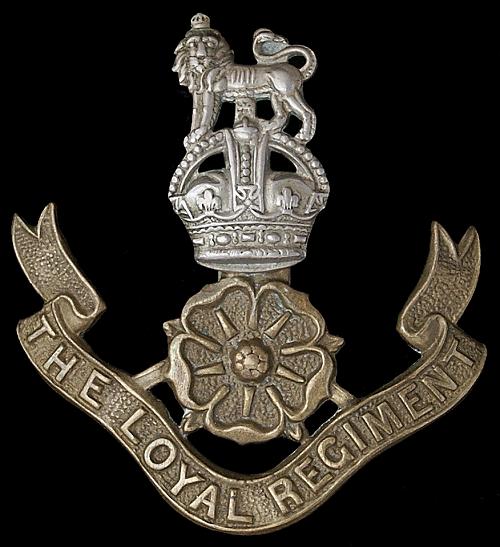 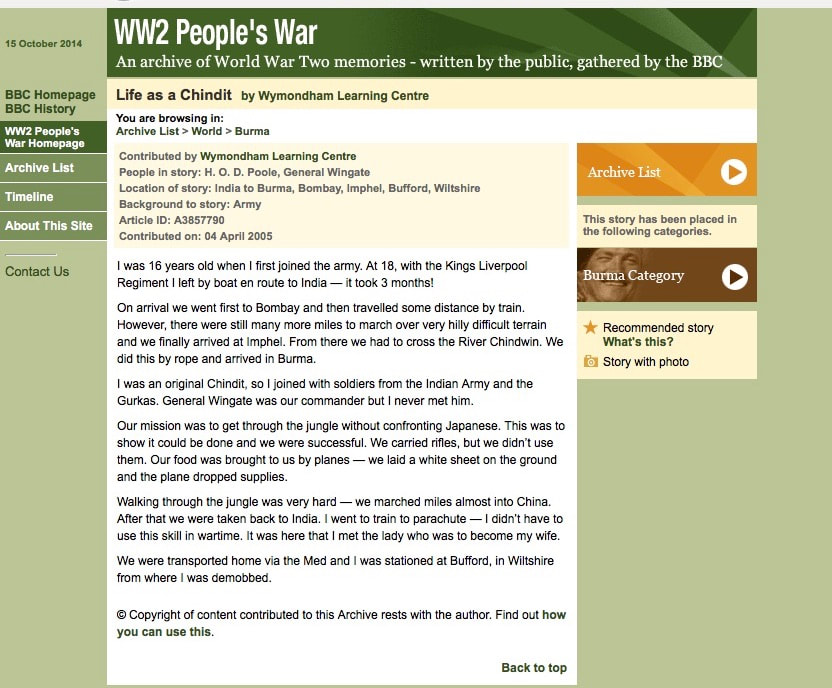 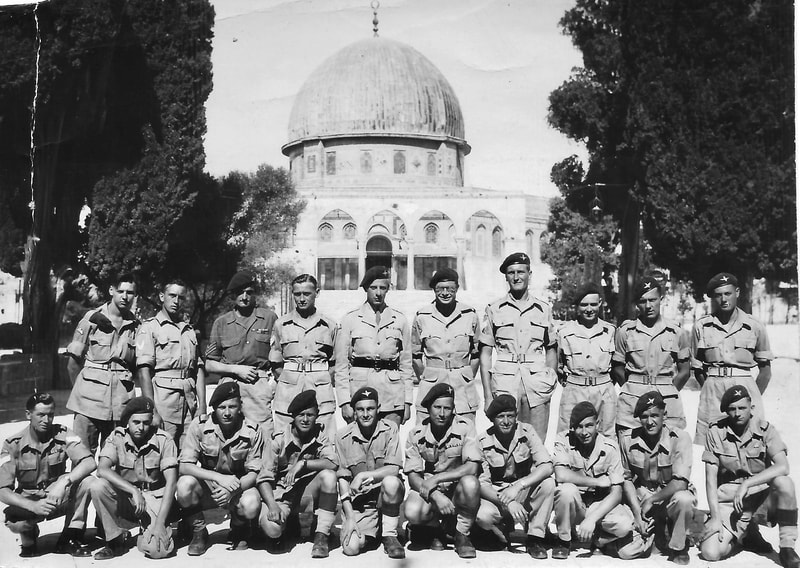 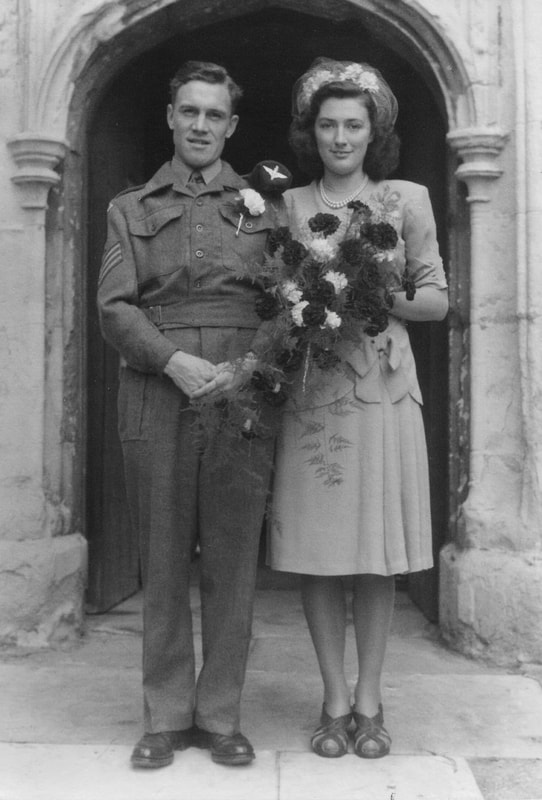