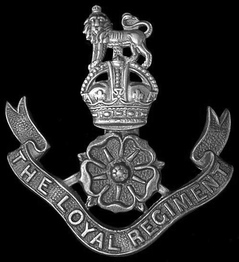 The cap badge of the Loyal Regiment.
In June 2016, I received a contact from Janet Smith via the on line forum, WW2Talk. The message simply read:
​
Good morning, I have been trying to find information about my grandfather, he was called Thomas Rayson and was captured and placed in Rangoon Jail where I believe he lived on just rice and cucumber. He never really spoke about his time as a POW or indeed about the war at all, he was very traumatised by his ordeal. I believe he served on Operation Longcloth and was part of 7 Column. Can you give me any tips on how to research his time in Burma please.

Thomas Rayson was born on the 5th May 1920 and was the son of Tom and Margaret Rayson from Cockermouth in Cumbria. Before the war he worked as farm labourer. He enlisted into the British Army and was originally posted to the 10th Battalion of the Loyal (North Lancashire) Regiment, before being sent overseas to India, where he joined the 13th King's at their Chindit training camp in Saugor on the 30th September 1942.

Pte. 3861537 Thomas Rayson was placed into 7 Column which was under the overall command of Major Kenneth Gilkes, formerly of the North Staffordshire Regiment. Thomas performed the role of muleteer in Burma and was in charge of handling one of the column supply mules, which carried most of the vital equipment needed on the expedition. Major Gilkes was a well respected leader, who would never ask a man to perform a duty that he would not be willing to carry out himself. During the operation 7 Column generally shadowed Wingate and his Brigade Head Quarters, but on several occasions did split up into sub-units in order to perform other tasks required of them by the Chindit commander.

After Wingate decided to return to India, the Chindits broke down into small groups of 30-40 men, these were called dispersal parties. Tom was placed in to a party led by Lieutenant Rex Walker. This group was made up of men who were already suffering from illness, disease or had been wounded previously during the operation. Walker's group had no real choice, but to return to India by the most direct route, as the men would not be able to last long enough to attempt the trek out via the Chinese borders which Gilkes had always favoured. We know that Thomas was suffering from foot trouble at this time and was struggling to keep up with the men in his party.

The 7 Column War diary records the break up of the unit on the 9th April 1943:

Sadly, Lt. Walker's group never reached the pre-arranged rendezvous or the supplies dropped for them at the Irrawaddy. It seems very likely that the group were attacked almost immediately after splitting from the other dispersal parties. The fact that two men from the unit were reported as being murdered by Burmese villagers on the 10th April, suggests to me that the vulnerable condition of the group had encouraged local villagers to attempt to capture the men in order to gain favour with the Japanese and possibly claim some sort of reward.

​To read more about the dispersal group led by Lt. Rex Walker, please click on the following link: Rex Walker and Dispersal Group 4

There can be no doubt that Rex Walker's party faired extremely badly after dispersal and none of the group managed to reach the safety of India after Operation Longcloth was called off. Tom Rayson and four other men who were captured by the Japanese in April 1943 survived their time in Rangoon Jail and eventually returned home to England. Other than these five men, everyone else from the dispersal party were either killed in action or perished as prisoners of war inside Rangoon Jail.

There is one surviving witness statement in relation to Lieutenant Walker's dispersal group, which was given by Captain Leslie Cottrell and Captain Henry Cotton who were both senior officers from 7 Column in 1943.

Here is an excerpt from the statement, as written by Captain Cottrell who was Column Adjutant in Burma:

"On April 10th we were on the Mongmit-Myitson Road, Lieutenant Walker was ordered to take charge of a party of 3 officers and 25 British Other Ranks. He was told to head westward toward the Irrawaddy and make for India by the most direct route. The group were armed and had ammunition, also they had two days hard scale rations per man. The officers had both maps and compasses. An air supply dropping was arranged for them just west of the Irrawaddy, but the party failed to make the rendezvous".

Seen below is a Gallery of images in relation to the first part of this story. Please click on any image to bring it forward on the page. 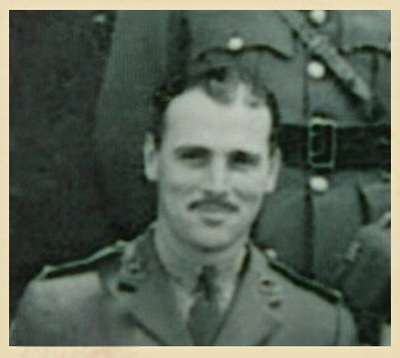 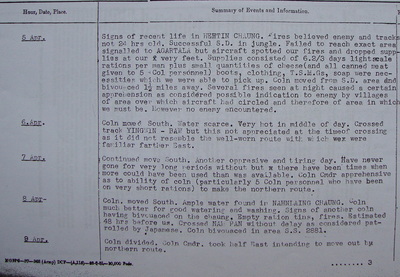 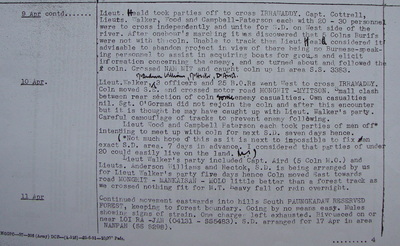 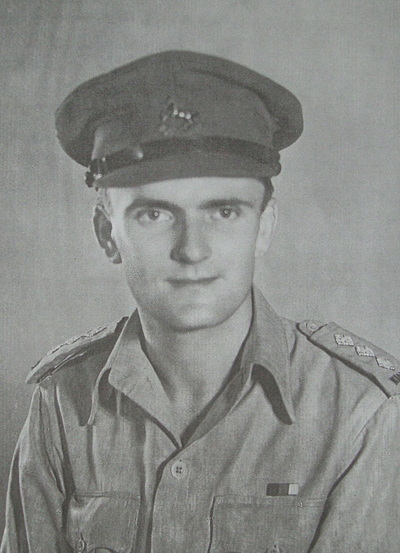 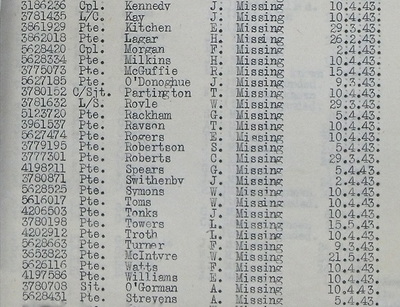 Tom Rayson was officially listed as missing in action as of the 10th April 1943. The only other information we have about his fate comes from a letter written by John Hector, the brother of Lt. Stephen Hector who was also lost from the same dispersal group in April that year. From the letter it seems that on 10th April, Tom was suffering badly with his feet and had dropped out of the line of march just south of the Burmese town of Inywa, situated close to the eastern banks of the Irrawaddy. Stephen Hector had gone back to look for him, but he also went missing. After waiting for one hour for the two men to return, another party which included Pte. Fred Hannaford was sent out to make a search. They returned empty handed and it was decided that the dispersal group should continue their journey west to India.

According to his POW index card (shown in the gallery below), Tom was captured on the 20th April 1943. These POW cards were collated and written out at the Changi Camp in Singapore, with the details for men held at Rangoon being completed in early March 1944. The card shows Tom's next of kin details, his Army number, date of birth and his POW number which was 328. The items written in Japanese characters on the front of card state his name and place of capture, which translates as Burma, very near Momeik.

Momeik was a colloquial name given for the town of Mong Mit, which was located just south-east of where Walker's group began their ill-fated journey back to India. So the place of capture mentioned for Tom makes perfect sense in this instance. The captured Chindits were taken to various POW camps depending on the area in which they were caught. It is highly likely that Tom was also sent to the Maymyo Camp, where the Japanese collected together well over 200 Chindits, before sending them all down to Rangoon by rail in crowded cattle trucks.
​
To read more about Maymyo Camp please follow this link to my website: Maymyo Camp

​Seen below is a map of the area around Mong Mit. This is the general location of Lieutenant Walker's starting position on the 9th April 1943 and is roughly 40 miles east of the Irrawaddy River. 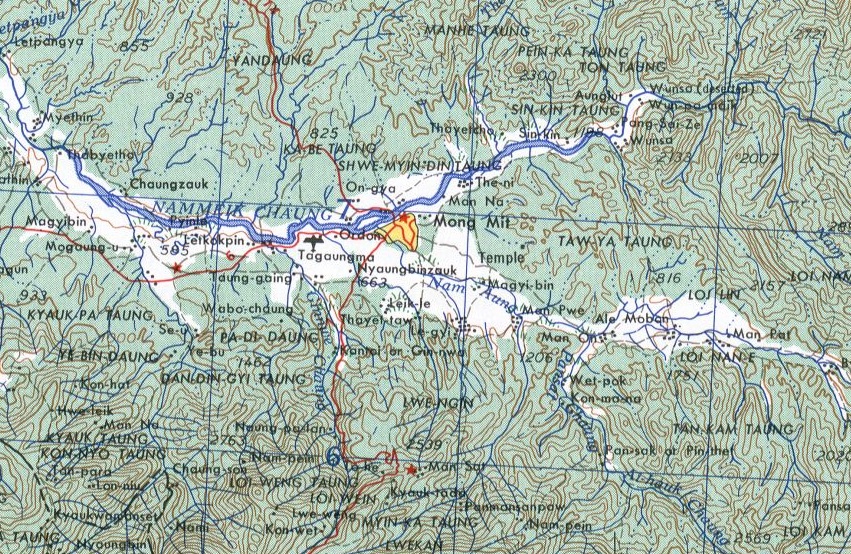 The area around Mong Mit, the general location of 7 Column's dispersal in April 1943.
At Rangoon Jail the Chindits were sent first into solitary confinement, where they were interrogated by the Japanese Secret Police known as the Kempai-tai; they were then released and lived communally in Block 6 of the prison. To read more about the conditions at Rangoon please click on the following link: Chindit POWS

Tom was chosen as one of the men who were deemed fit enough to be marched out of the jail in April 1945, as the British 14th Army closed in on the capital city. It is thought that the Japanese were looking to take these prisoners with them as they retreated back into Thailand, to be used as slave labour for various tasks in the defence of their borders, or possibly to work on the infamous Burma Railway. As it turned out their plan proved unsuccessful and the men were released on the 29th April and were subsequently liberated by soldiers from the West Yorkshire Regiment at or very near a place called Waw, located close to the Pegu Road.

The sentence written in Kanji characters seen on the reverse of Tom's POW card (shown below), relates to his liberation at the village of Waw. Post liberation, most of the Chindits were sent back to India for hospitalisation and then a long period of rest and recuperation, before, in Tom's case, re-joining the 13th King's who were now based at the Napier Barracks in Karachi.

Seen below is another Gallery of images in relation to this story. Please click on any image to bring it forward on the page. 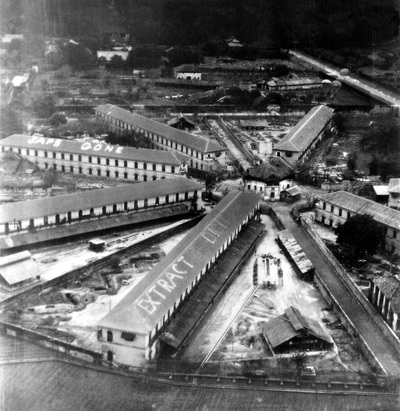 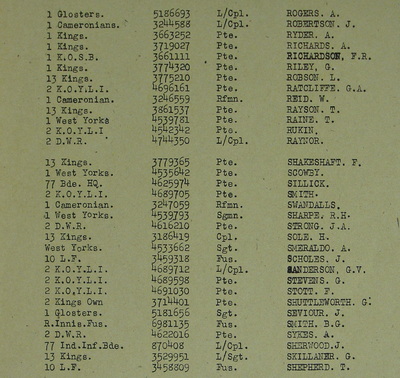 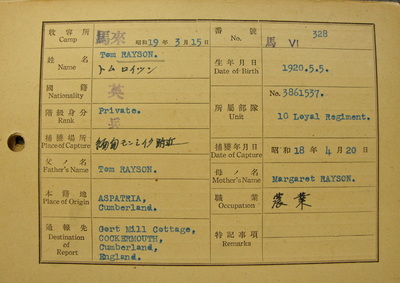 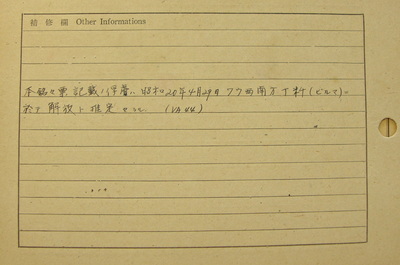 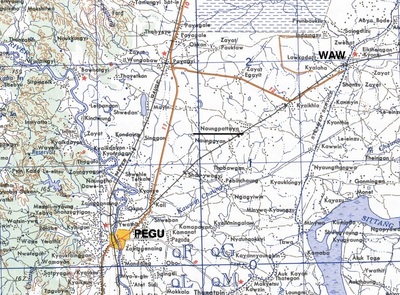 The reason we have started to look into my grandfather's war time experiences, is because my daughter was asked to do a school project on a member of her family and we felt that Tom was the best person for her to write about.

Janet asked me if I thought that the Pte. Rayson mentioned in the letter written by John Hector was her grandfather? I replied that in my opinion it definitely was. I explained that after the war, John Hector had tried very hard to find out what had happened to his brother and the other men from Lieutenant Walker's group. He had spoken with all the other survivors from Rangoon Jail and some officers who were also on Operation Longcloth. Tom was the only survivor from the group of POW's to live in the north of the country and John Hector had hoped to meet with him and did make the journey up to Cumbria.

Sadly, Tom felt unable to meet with John as he found the trauma of re-visiting those terrible days too upsetting. And who could blame him for feeling this way.

Janet continued:
​
Granddad was a lovely caring man who put his family first, he used to scour the countryside looking for mushrooms to feed his large family with, to this day my Mum still can't look at mushrooms. He married Edith, my Nan and had six children. He received three medals for his service in World War 2, the Burma Star, the 1939-45 Star and the War Medal. After returning home in late 1945, he went to work as a Council Warden. My granddad sadly passed away on the 31st January 1999, he was 78 years old. The thing I always remember was how he loved his pipe and a pint of Guinness. 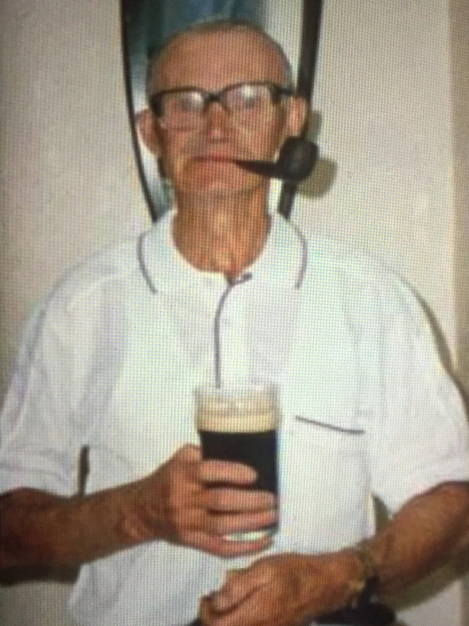 Tom Rayson seen with his beloved pipe and pint of the black stuff.
Copyright © Steve Fogden, June 2016.
​With special thanks to Janet Smith for all her help and the photograph of her grandfather Tom Rayson.