The Trials Of Purna Bahadur Gurung 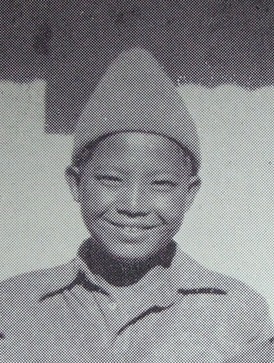 A typical young and enthusiastic Gurkha recruit.
The image shown to the left is that of a young and hopeful Gurkha recruit, probably aged 14 or 15 and at the very beginning of his association with the regiment. Purna Bahadur Gurung was once just like the boy photographed and had barely reached his 19th birthday when he was attached to the 77th Indian Infantry Brigade and began his Chindit training.

Purna became a part of Column 1 in 1942 under the overall leadership of Major Vivian Weatherall, a Gurkha Officer much loved and trusted by his men. By the time the Column departed for Burma, Weatherall had been asked to give up control of Column 1 to Major George Dunlop, with the Gurkha officer stepping down to second in command. This decision was to be a critical factor in the poor performance of the unit during active service on Operation Longcloth, as by Dunlop's own admission, he had no experience in leading Gurkha troops, nor could he communicate with them in their native Gurkhali.

Purna Bahadur Gurung took his place in Platoon 8 of Column 1 and became an orderly to the platoon's junior commander, Jemadar Kali Gurung. Both these Gurkhas took part in the long and arduous campaign that year and had by late April found themselves in a life or death struggle to successfully return to Indian soil. By May 1943 they had reached the town of Yuwa, which was situated very close to the last physical obstacle on their return journey, the Chindwin River. It was here that Purna was captured by the Japanese after being betrayed by some local Burmese villagers.

Purna's story is a very good example of what tended to happen to captured Gurkha Riflemen from Operation Longcloth. Unlike their British counterparts, who almost to a man were collected together and ultimately sent down to Rangoon Jail, where they would spend the rest of the war as slave labour, working in such places as Rangoon docks, the captured Gurkhas were kept nearer the Indian/Burma border. Here they often worked as servants to Japanese officers, or helped to look after mules and other animals, as part of the Japanese build up to the invasion of Assam (Imphal and Kohima) planned for early spring 1944. The Gurkhas would almost certainly have been offered membership of the Indian National Army or INA and the chance to switch allegiance to the Japanese cause, loyal as ever almost none accepted this offer.

To read about the Chindits held in Rangoon Jail, please click on the link here:
Chindit POW's

Purna had been used by the Japanese for similar duties to those described above. Here is the transcription of his interrogation report, given to the investigation bureau set up to decide whether a returning soldier had been 'turned' or compromised in any way by his POW experience. Many
Gurkhas successful in escape or evasion had been recommended for a gallantry award by the bureau and this question also forms part of Purna's debrief file:

Note: Soldier is unmarried with no siblings. 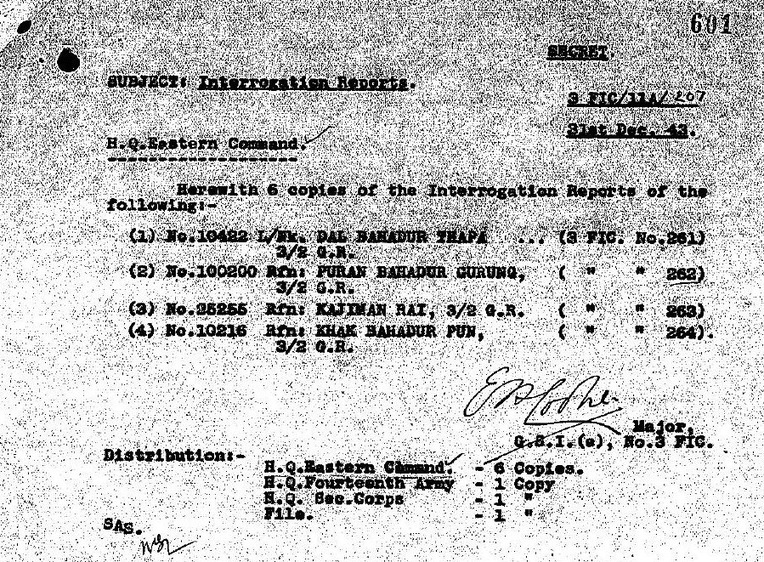 Introduction: Rfm. Purna Bahadur was a member of the Wingate expedition and was captured near Yuwa by the enemy whilst retreating toward the Chindwin in the month of May 1943 along with 12 others including Aita Singh Gurung (3 FIC no. 287). He was moved along with other Wingate Expedition POW's to Mawlaik, Kalewa, Monya, Kaing and finally Paluzawa, from where he managed to escape along with Dal Bahadur Thapa, Kajiman Rai and Khak Bahadur Pun on 03/12/43.

Two weeks strenuous journey brought them to the village of Kameik from where they were conducted by the village headman to HQ 100th Indian Infantry Brigade on 17/12/43. On the following day they were received at 3 FIC. This statement may be read with that of Aita Singh Gurung.

Early History: I spent my early life farming with my father at home in Nepal State. I did not go out of the village before I enlisted. I am illiterate. After the death of my father I decided to join the Army at the age of 17.

Enlistment: I was recruited into the Army at Gorakphur on the 17th October 1940 and sent for training at Dehra Dun, where I later joined the 3/2 G.R.

In April 1941 my regiment moved to Fort Sandaman, where we were given initial training in jungle warfare for one year. Further advanced training was completed at Loralai and Saugor. Drafts from other Gurkha units also joined us at Saugor. All the expeditionary force was divided there into 8 columns, each containing 317 personnel, but No. 6 column was later disbanded. The whole force then moved on to Jhansi and thence to Imphal, where yet more drafts of Gurkhas were absorbed into the force.

Wingate's Expedition: I was orderly to Jemadar Kali Gurung who commanded No.8 Platoon in Column 1. We penetrated deep into Burma and over the Irrawaddy.

Exploits and Encounters with the enemy: He confirms all the encounters and other details of incidents inside Burma already given by Aita Singh Gurung in his statement.

Capture: I, along with 12 others including Aita Singh were separated from the main body of our column about 13 miles east of the Chindwin River. We had reached the east bank of the river safely but fortune then deserted us. We were deceived and then captured by Burmese villagers near Yuwa and handed over to the Japanese. Our Army documents were collected at Mawlaik and we were moved on to Kalewa.

We were moved to Pantha and other camps. The following other POW's were kept by the Japs at Mawlaik to look after the mules:

At Kalewa: (June to August '43). In June we were brought to Kalewa. There were 17 British soldiers present and 72 Gurkhas.

At Monya: (August to September '43). This was the Japanese temporary Brigade HQ. Leaving behind 20 Gurkhas at Kalewa the remainder of the party was taken to Monya. We Gurkhas were made to carry the luggage and supplies and the Japanese made the journey by rail and road. I, along with 4 other Gurkhas were made to look after the mules. We cut grass from the jungle for our mules and groomed them. Rfm. Aita Singh and Rfm. Khahak Bir had jobs in the mess room, while Havildar Bilal Manbahdur Chettri was made servant to the Japanese Brigadier with the long whiskers. We were kept at Monya for about two months.

At Paluzawa: (October to November '43). For two weeks we lived in the jungle and then shifted to newly built huts just south of the village. We were employed by the Japs in their mess room performing general duties.  It was from here that some of the men escaped (Aita Singh Gurung). The Japanese spent two days searching for the missing men and tightened up their control of the camp and our duties. About a week after the escapes some RAF Recce planes came over, the Japanese became paranoid that the Allied Command were going to attack the camp. However, on about the 12th November some RAF bombers did come over and bomb the area near our village, but no damage was caused. On the 17th November the camp was hit by RAF bombs causing damage to the huts and Japanese mess room. The Japs then shifted their accommodation further out from the village.

We slept in a hut with 10 Japs, our mules were in the next hut and we were responsible for their upkeep. We cooked rice for the Japs and did all the menial work as well as acting as Syce (groom) to the mules. The mules were used to take supplies up to the front, I was given an identification badge to wear for this duty. 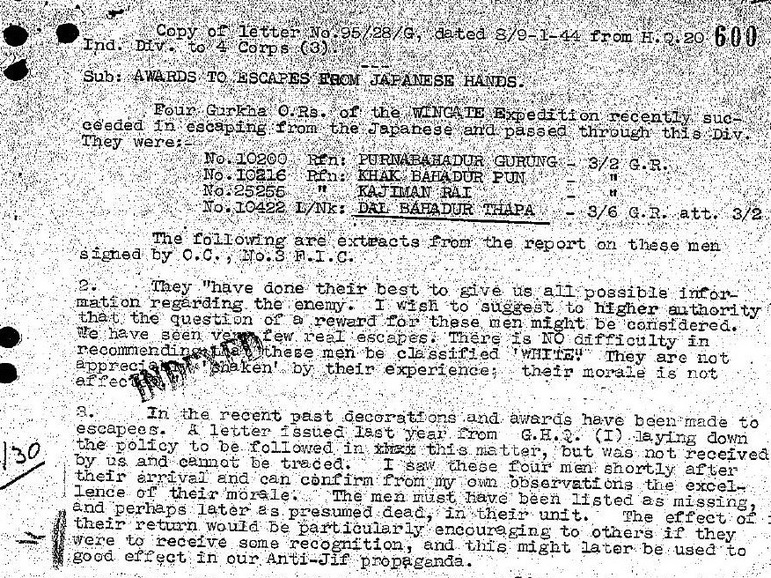 Report from the interrogation regarding the award of a gallantry medal for the listed escapees.
Purna's report concludes:

Escape: Some men were sent away to Mandalay to collect some more mules for our camp. It was then that my group decided to escape to India. On 2nd December we stealthily left our hut one by one while the Japanese were sleeping. We travelled for about 13 days in the jungle and then hills towards India. Fortunately we had smuggled out some rations of rice which we ate during our long and strenuous journey. We did not meet any Japs or B.T.A. (Burmese Traitor Army) on our way. On the 17th December we reached Kameik, where the headman took us to the local HQ of 100th Indian Infantry Brigade.

Conclusion: This Gurkha youth has been in enemy hands for about 7 months performing fatigues for the Japanese. He did not receive any serious propaganda from the enemy nor has he acted in anyway that could be condemned. He is still as loyal as ever. This is certainly a genuine escape and can be read in conjunction with other similar reports given by his comrades and others.

Purna Bahadur Gurung like his three companions, is a semi-illiterate Gurkha Rifleman born in Nepal. He has done his best to give as much information as possible about his time as POW and the whereabouts of the enemy. I would like to suggest to higher authority that the question of a reward for the six men (undermentioned), might be considered, as we have seen very few real escapes for this expedition. There is no difficulty in classifying the above men as "White" and free from suspicion. They are not greatly shaken from their experience and their moral is not affected:

The form is then signed by the investigating officer and no doubt due process takes over from this point onwards.
Many thanks must go to my good friend Enes, for his invaluable help in presenting this story.