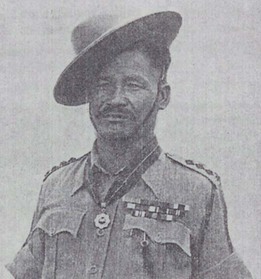 Tikajit Pun was born in a village called Nangi, in the district of Tehsil, Nepal, he enlisted into the 1st Battalion of the 2nd Gurkha Rifles in November 1922, and saw his first active service on the North West Frontier in 1924, being awarded the Indian General Service Medal 1923-24. He served on the frontier again with the battalion in 1937 and was awarded his second IGSM for the 1937-39 campaign.

He was granted the Viceroy's Commission in 1937 and transferred to the 3rd Battalion when it was re-raised in 1940. In 1943 as a Subedar in Column 4 of the Chindits, he took part in the First Wingate Expedition, leading a group of very young and inexperienced Gurkha Riflemen behind enemy lines in Burma.

Here he performed outstandingly well under very difficult and arduous conditions and ended up being awarded the Indian Distinguished Conduct Medal for his efforts that year. Here is the citation transcript for that award, as recommended by his column commander Major R. Bromhead:

Subedar Tikajit Pun was the senior Gurkha Officer of a Column which was forced through a breakdown in communications and the consequent lack of rations to return across the CHINDWIN under particularly arduous conditions. His energy and devotion to duty were unfailing and on all occasions he set a superb example of cheerfulness in great adversity. It was largely due to his exemplary conduct that his men, despite hunger and exhaustion, regained their base as a formed body and without casualties. He displayed the same qualities of leadership during this difficult march as he had previously shown under fire and was throughout of the greatest assistance to his Column Commander.

London Gazette 19 October 1944.
Column 4 had the unenviable honour of being the first Chindit unit to be broken up by the Japanese and attempt to disperse back to India. It had originally been led by Major Philip Conron of the 3/2 Gurkhas, but he had to be replaced by Wingate's Brigade Major, Robert Bromhead, after just a few short weeks in Burma. Wingate had used the column as a shield during the initial stages of the expedition, often detailing Column 4 as rearguard or asking the unit to probe into areas where the enemy was thought to be. It has been stated in some reports written about operation Longcloth, that Philip Conron had lost his nerve during the early days of the operation, and was especially over concerned about the noise made by the radio battery charger. It is said that he often refused to allow these batteries to be charged once the column was in bivouac and as a result the column lost contact with the main Brigade HQ.

By early March the column was closing in on a potential Japanese garrison at a place called Pinbon. The weather had turned stormy and under the protection of this heavy rain Wingate and the other British columns had pushed past the first line of Japanese patrols, marching confidently down the main tracks in that particular area. Column 4 were given the task of keeping the local Japanese garrison occupied, whilst columns 3 and 5 moved quickly toward their main objectives at Nankan and Bonchaung respectively.

On March 4th Bromhead's men were heading toward a town called Wuntho, when out of the blue they were attacked by a large force of Japanese soldiers. The column was in the normal single file or 'snake' formation at this point in time and the enemy managed to break up it's line in several places. It was at this point that Tikajit Pun and a young British officer named Lieutenant Stewart-Jones (some books have him as Stuart-Jones) managed to lead around 130 away from the fighting and head northeast. The remainder of column 4, including Major Bromhead, and after careful consideration, decided to return to India.

Tikajit and Stewart-Jones spent several days trying to locate the main body of Northern Group, hampered by having no means of communication and by now very low on rations, they were delighted to bump into a party from Major Scott's 8 column. The remnants of Tikajit's dispersal party eventually exited Burma via Fort Hertz later that month. His leadership qualities were a vital component in getting so many of the 130 or so men out of Burma that year.

Early in 1944, Tikajit accompanied the battalion to the Arakan with the 25th Indian Division and served there until the end of hostilities. The war in Burma for the 3rd Battalion ended with the heavy fighting around Tamandu, which culminated in the capture of 'Snowden East', where Bhanbhagta won the Victoria Cross. By this time Tikajit had been promoted Subedar Major and in 1945, was awarded the MBE for his outstanding and gallant services in the Arakan.

Below are two documents in regard to Tikajit Pun and his various gallantry awards. Firstly to the left, the notification in the 3/2 Gurkha Rifle War Diary for September 1944 recording the ceremony at which the IDSM medal was presented. Then to the right, his MBE citation, as recommended by Lieutenant Colonel P. Panton for his efforts in the Arakan offensive during 1944 and beyond.

For a much more detailed account of the military life and career of Tikajit Pun, please click on the link below. Congratulations must go the gentlemen who produced these website pages, especially Mark Sellar who compiled the information on Tikajit Pun. 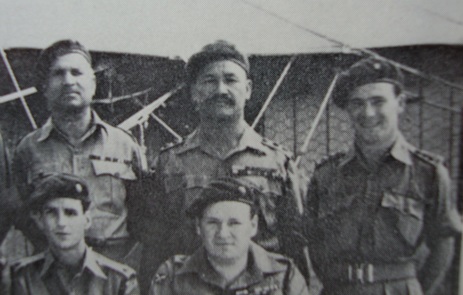 Tikajit Pun went on to serve with the 2nd Gurkha Rifles after the war in places such as Malaya, he continued to excel and impress during this period. In the photograph opposite he can be seen in the centre of the back row. This photo was taken in the 1950's and is of the 1st battalion 2nd GR, at the Ulu Pandan barracks in Singapore. By this time Tikajit was a Lieutenant in the battalion, but went on to achieve the rank of Captain.

The family tradition of faithful service to the 2nd Gurkha Rifles was continued by his eldest son Lalbahadur, who became the first Gurkha Rifle recruit to attend Staff College, passing out from Sandhurst in 1959. Lalbahadur was awarded the Military Cross in 1965 during the 1st battalion's tour of duty in Indonesia. He led a successful ambush attack on a large group of insurgents just inside the Indonesian border and nullified their future effect on proceedings.

Seen below is the full medal entitlement of Captain Tikajit Pun, a real Chindit hero in every sense of the word.

Copyright © Steve Fogden (and other contributors as stated) 2012.