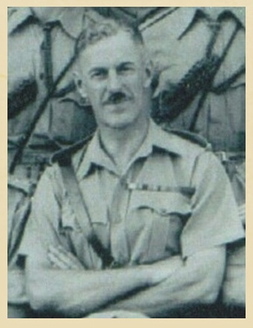 William Moncrieff Robinson (1942).
Lieutenant-Colonel William Moncrieff Robinson assumed command of the 13th Battalion, the King's Regiment on the 27th October 1940, whilst the battalion were carrying out coastal defence duties at Felixstowe in Suffolk. William had previously been in charge of the 309th Infantry Training Centre and had also served with distinction during WW1 whilst with the Sherwood Foresters (Notts & Derby Regiment).

William was born on the 11th February 1891 in Huddersfield, West Yorkshire. He was the son of Frederick William and Janet Brooke Ritchie Robinson, also residents of Huddersfield. According to the 1911 Census William, now aged 20 was still living at home with his parents at 4 New North Road and was described as a student in the census listing.

William was commissioned into the Sherwood Foresters on the 12th May 1915 and entered the war in December the same year, seeing action in France and Flanders. The young Lieutenant was wounded on no less than three occasions during the war. He attained the rank of Acting Captain in December 1916 and Temporary Captain in April 1917. After WW1 was over, William remained in the Army reaching the rank of full Captain in 1923 and Brevet Major in 1938.

According to the information on his WW1 documentation, Major Robinson was the officer commanding, 2nd Battalion, Sherwood Foresters during their time as part of the British Corps of Occupation in Constantinople in 1922. For more information about the Allied Occupation and the need for British troops in the city, please click on the following link: https://en.wikipedia.org/wiki/Occupation_of_Constantinople

Whilst searching for information about William on line, I came across this short description of his unusual journey when enlisting for service in WW1. From the article 'In the Thick of It', written by one of William's grandchildren:

Many of my generation, the so called Baby Boomers, grew up with stories of our fathers' and grandfathers' exploits in one or both of the World Wars. My paternal Grandfather, Lt-Col. William Moncrieff Robinson, fought actively in both. World War One was declared while my Grandfather was an English tutor to the Shah of Persia's staff based at the palace in Ispahan (or Isfahan) – where the Shah kept his harem. He had recently graduated from Oxford. On hearing the declaration of war, and seeing the Kitchener poster demanding his enlistment, my grandfather immediately decided to “join up", but his route home proved more complicated than anticipated thanks to penury and Turkey entering the war on the side of the Austro-Hungarians. Months later he arrived back in England having journeyed across the winter wastelands of Russia.

To see the full article, please click on the following link:http://www.withoutprejudice.co.za/publication/2014/November/articles?page=2

Seen below are some images in relation to William's service during WW1, including his medal entitlement card and the awards he received. Please click on any image to bring it forward on the page. 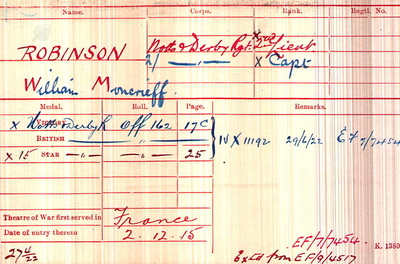 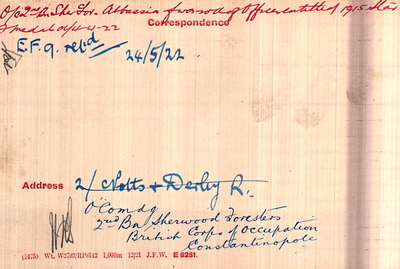 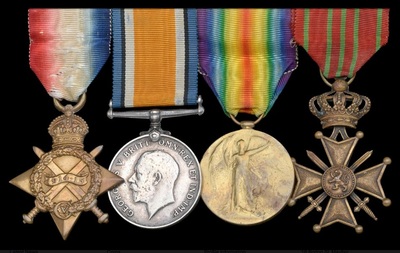 After a period of service in Palestine, William returned to Britain in 1939 with the new rank of Lieutenant-Colonel. As mentioned previously, he was given command of the 13th King's in October 1940, replacing the outgoing Lieutenant-Colonel E. Dunbar whilst the battalion were stationed at Felixstowe. The 13th King's, then part of the 208th Independant Infantry Brigade (Home) continued to perform defence duties across the south-east coastline of England. In late 1941 the battalion were ordered to prepare for service overseas and on December 8th boarded the troopship 'Oronsay' and travelled via the Cape to India.

The majority of the battalion was made up of men in their early thirties and many of these were married with young families. They were assigned internal security and garrison duties in India and were based at the Gough Barracks situated within the Secunderabad Cantonment. Fate of course intervened in mid-1942, when the 13th King's were handed over to Brigadier Wingate to comprise the British Infantry element of his newly formed 77th Indian Infantry Brigade, soon to become known as the Chindits.

Slowly, but surely during the next few months, many of the original members of the 13th King's were weeded out of the ranks, as they were found to be too old or unfit to continue the arduous and specialised Chindit training. In October 1942, William Robinson, by now in his early fifties was also told that he was considered too old to continue training and that he would not be leading the battalion into Burma the following year. William was devastated by this news and complained bitterly to Wingate, pleading for the chance to prove himself.

Sadly, he was never given his chance and was replaced by Major S.A. Cooke of the Lincolnshire Regiment on the 3rd November 1942, whilst the battalion were training at Atta in the Central Provinces of India. The battalion's War diary from that time simply states:

In fact William was given a job at India Central Command and a promotion to General Staff Officer (Grade 1). Captain Leslie Cottrell, Adjutant from 7 Column, had this to say about William Robinson:

In January 1943 the 13th King's and the other units of 77 Brigade moved by train to Dimapur in Assam; but not all the officers and men who had made up the 13th King's at Patharia still constituted that regiment at Dimapur. Several had been 'weeded out' as it was perhaps unkindly put and reinforcements brought in. Some officers and Warrant Officers, including the Commanding Officer, Lieutenant-Colonel Robinson and RSM Kelly, were considered too old to take part in the forthcoming campaign and some others were of too low a medical category. The 13th King's lost an excellent commanding officer in Lieutenant-Colonel Robinson, but found an equally fine one in his replacement, Lieutenant-Colonel S.A. Cooke.

William Moncrieff Robinson retired from the Army whilst serving with his original regiment, the Sherwood Foresters on the 6th February 1946. Frustratingly, I have not been able to discover anything more about his life after WW2. He did however live in Kensington, West London for a time in the 1950's and in December 1955 voyaged to Beira, the second city of Mozambique, aboard the passenger ship 'Kenya'. According to records available on line, William died during the summer months of 1974 in the county of Oxfordshire.

Featured below are some more images in relation to this story. Please click on any image to bring it forward on the page. 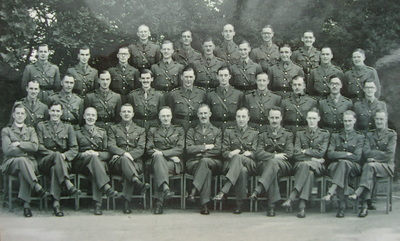 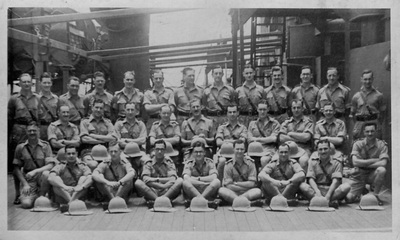 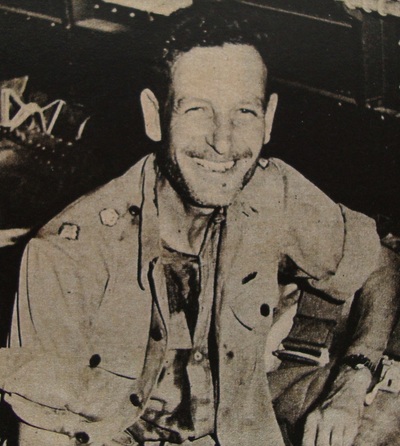 I was extremely pleased to receive the following email from Dan Robinson, one of William Robinson's grandchildren:

Just to say, that I enjoyed reading your article on my grandfather's life and time in India with the 13th Battalion. I knew him when he was living in Long Crendon during the 1960's and 1970's. He kept a letter from his time with the King's, which was sent to him by Orde Wingate, telling him he would not be going into Burma with the Chindit Brigade. He was later involved with the planning and training for the second Chindit endeavour in 1944. I remember that when he died, his memorial service was well attended in his home village and this included many Chindits with whom he had previously served.

I am very grateful to Dan for allowing me to reproduce through transcription, the above mentioned letter, sent to William Robinson on the 3rd November 1942, while the battalion were stationed at the Chindit training camp at Saugor. As you will read, it is clear that Brigadier Wingate held Colonel Robinson in high regard and had appreciated greatly his efforts during those latter months of 1942 at Saugor.

I am exceedingly sorry that you are leaving this Brigade. Throughout the very trying period of formation during the past 18 weeks, you have been a great support and strength to me and your battalion. Were you ten years younger, we would have been able to benefit by your continued presence with us in operations. As it is, although I know it is a choice of evils, it is better I believe, not to risk a probable breakdown in health during the campaign which would be hard to remedy. I do hope that the authorities will find you a post where your tactical knowledge and power to manage men will have full scope.

I am sure we shall meet again and depend on you to make contact should we be in the same neighbourhood together, as I will if I hear of your whereabouts. My permanent address is, The Army and Navy Club, Pall Mall. Let me know, if in the coming weeks, there is anything I can do to help.

In early January 2021, the Chindit Old Comrades Association membership booklet for William Robinson, alongside two other related documents were placed up for sale on the London Medal Company website here:

london-medals.co.uk/second-world-war-chindit-association-membership-card-and-booklet-issued-for-an-honorary-member-to-lieutenant-colonel-w-m-robinson-13th-battalion-the-kings-liverpool-regiment-formerly-nottinghamshire-and-derbyshire-regiment-the-sherwood-foresters-w
Up until the time of writing (12th February 2022), the papers were still on offer. Seen below are two images of the membership cards, please click on either image to bring them forward on the page. 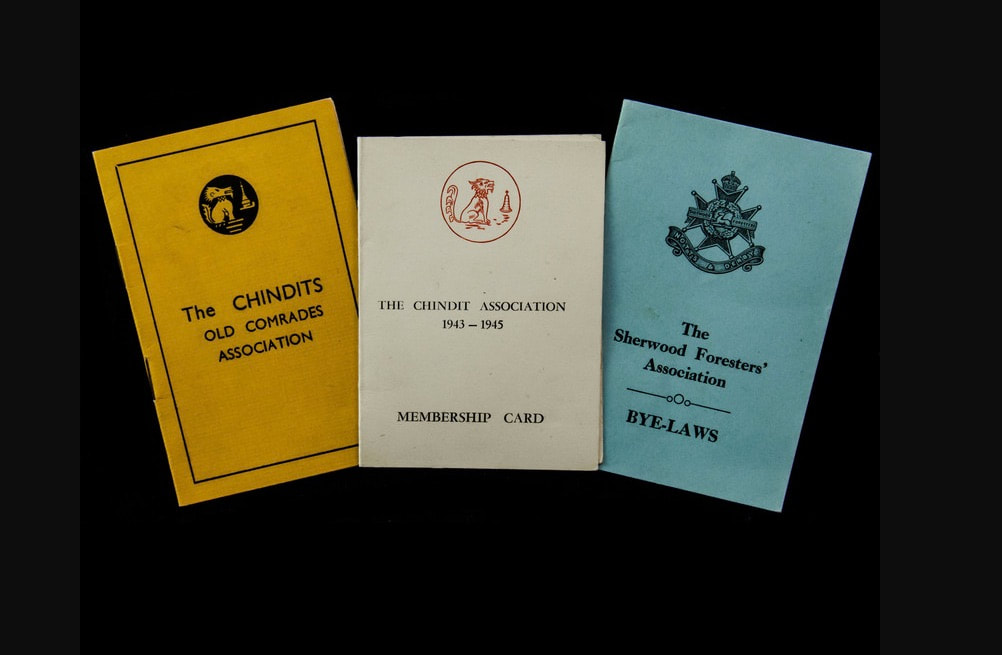 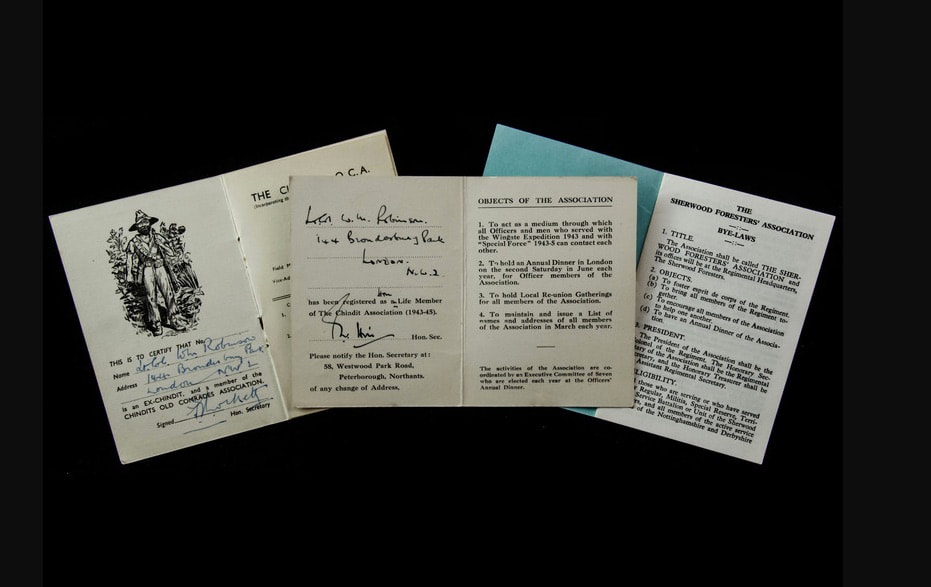