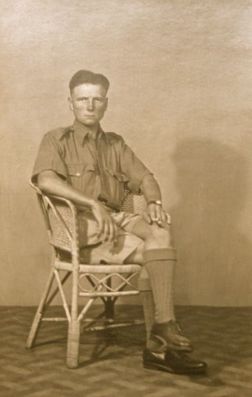 Alfred Nicholls, India 1942.
Alfred Nicholls was born on the 15th June 1915 and was the son of Edward and Katherine Nicholls from Cartland Road, Stirchley in Birmingham. In civilian life, Alfred worked as an electrical line repairman before he enlisted into the British Army, being posted in the first instance into the Royal Warwickshire Regiment. In early 1942, he was posted overseas to India where he transferred to the King's Regiment and joined Chindit training at the Saugor Camp in the Central Provinces on the 26th September.

Pte. Nicholls became a member of 5 Column in the autumn of 1942, serving with Rifle Platoon No. 7 under the command of Lt. Philip Stibbe formerly of the Royal Sussex Regiment. Alfred served with 5 Column in Burma during the months of February and March, before being captured on the 2nd April at the Shweli River. To read more about his time with No. 7 Platoon and the lead up to his capture at the Shweli, please click on the following links:

Alfred was one of the few Chindit men from 5 Column to survive his time as a prisoner of war inside Rangoon Jail and was liberated in late April 1945. His Japanese POW card shows his date of capture as 2nd April 1943 and records his POW number as 340. The reverse of the card suggests that he was liberated on the 29th April 1945 at the Burmese village of Waw, situated on the Pegu Road. However, Alfred appears in a group photograph of liberated prisoners taken on 3rd May back at the jail. So it may well be that the information given on the reverse of his POW card is incorrect.

On the 30th June 2015, I received an email contact from Kevin Nicholls, the son of Pte. Alfred Nicholls. Kevin told me:

I have read with great interest your website about Operation Longcloth. My dad was Alf Nicholls a prisoner of Rangoon Jail. My Mom Kathleen found the capture card you posted so fascinating. Norman Fowler was Dad's best mate from their time together with the Warwickshire Regiment and they looked after one another in the jail and remained friends until Dad's death in 1991. Norman's wife Olive is doing well and about to celebrate her 100th birthday. If you have any more information about them both I would be grateful to receive it, likewise if you have any questions let me know.

​This was my reply to Kevin's initial email contact:

Thank you for your email contact via my website. It is wonderful to hear from you. I'm pleased that your Mum found the POW index card of interest. Your father was in Column 5 on Operation Longcloth and in Rifle Platoon 7 led by Lieutenant Philip Stibbe. He was captured on a large sandbank in early April 1943 with a group of around 30-40 other men. He then spent two years as a prisoner of war, until his liberation in late April, early May 1945. Alf was one of the very few men from 5 Column that survived their time in Rangoon and came home, so he must have been very tough and determined. A good story for you all to read which tells of the men on the sandbank is that of Pte. Henry Ackerman, here is the link: Pte. Henry James Ackerman

I was very interested to learn of your father's friendship with Norman Fowler, I do not know if you are still in contact with the Fowlers, but if you are I would very much appreciate it if you might mention this story and letter to them. It would be fantastic to have a photograph of Alf and Norman if one exists. I would obviously like to hear more about Alf and his life from before the war and after. It would then be possible to add his story to the website.

One final thing; I was recently contacted by the grandson of another 5 Column Chindit named Gerald Desmond, who was from Ireland. His grandson, Liam, sent me some photographs of POW reunions from back in the 1980's, these included one of your Mum and Dad with some of the other guests. Can you tell me anything about this photograph and the other people shown.

Thank you for the email and the photograph you have sent, Mom recalls that reunion. The chap on the table with Mom and Dad is R.A.S. Pagani an ex-paratrooper held at Rangoon who has written a very interesting book about his life. In the background with the beard is an American fellow called Karnig Thomasian whom Mom has had regular correspondence with over the years.

Anyway, Mom is going to compile a history of Dad and yes she does have a photo of him and Norman, or Uncle Norman as I knew him. When completed I will be pleased to send it to you. Dad was a smashing little chap with high moral values and the older I get the more I realise how these made good sense. The one thing I will never be able to have though, is the fact he never showed any fear, I have seen many a man twice his size back down from him. I suppose he thought what ever happened later in his life, he would never 'kow-tow' to anyone again after his experiences with the Japanese. From the odd story he told, we know that on the first night of his capture he was chained to a teak tree by the Japanese. Dad sadly passed away in 1991.

As I have said, whatever Mom and I get hold of we will send to you. As a result of your website, Mom has now asked me to take her to see Olive Fowler who is in a nursing home and we will be glad to pass on any information to her.

NB. Sadly, Olive Fowler passed away on the 12th September 2016 not long after her 101st birthday. Seen below is a Gallery of images in relation to this story. Please click on any image to bring it forward on the page. To read more about Alf Nicholls' best mate Norman Fowler, please click on the following link: Pte. Norman John Fowler 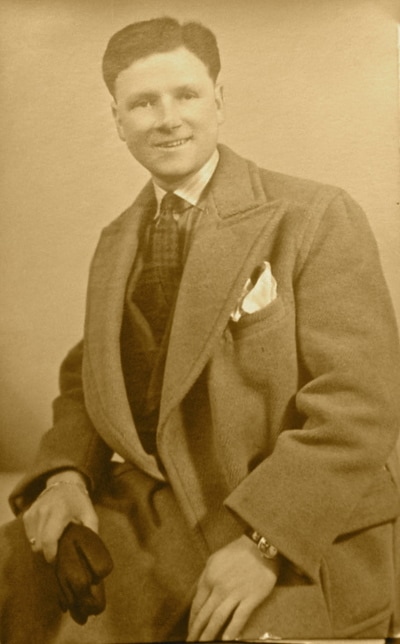 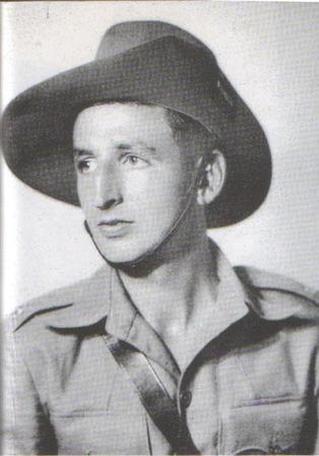 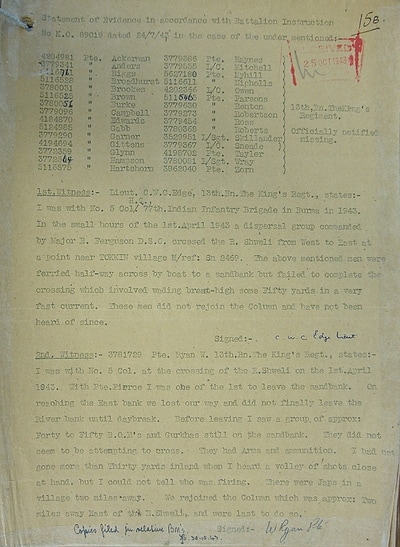 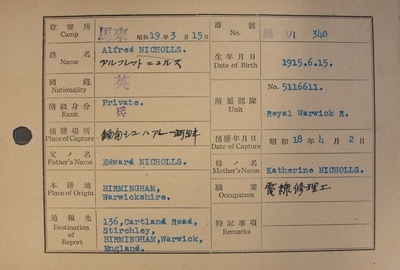 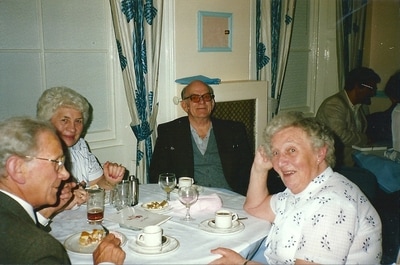 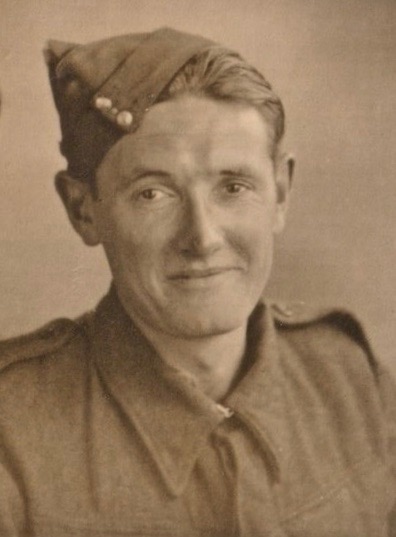 In mid-2016, I was pleased to receive another email contact from Kevin Nicholls:

Steve, I have recently joined a club called PROBUS, for retired professionals and business men. Once a month we have a guest speaker to talk about different things of interest. I was hoping to talk about my Dad at some point in the near future, but better still I was wondering if you might be a available to give this talk, as it seems you have made a lifetime study of Operation Longcloth. I don't know whereabouts you live and if logistically it would be possible for you to visit us at Coleshill. We meet on the first and third Tuesday of each month.

I was honoured to accept Kevin's invitation and gave a talk about the men from the first Wingate expedition at the Coleshill Hotel on the 6th December 2016. On a cold and foggy winter's day, I made my way up the M1 and then the M6 to meet the gentlemen from PROBUS and their specially invited guest that day, Alf Nicholls widow, Kathleen. After delivering my talk to an attentive and well-informed audience, it was wonderful and indeed fascinating to spend a short-time chatting with Kathleen and learning much more about Alf Nicholls and many of the other men who had spent so many months imprisoned inside Rangoon Jail.

A few days after my return home, I was delighted to receive the following email from Kevin Nicholls:

Stephen, I can't tell you enough how pleased I was with your talk the other day. I've been getting feedback from the members too of how they enjoyed it. I can tell how much effort you put in and your passion for the subject really shone through. I'm so glad I was able to take my Mom as she too discovered things she was unaware of. I wish you all the success in future talks, you came over as very relaxed and knowledgeable and if that was your first talk it certainly didn't show. The artefacts you brought to support your talk were of great interest to the group. Once again, on behalf of PROBUS, my Mom and me, thank you.

In addition to speaking with Kathleen and Kevin at the Coleshill Hotel, I was also given some photographs and other documentation to examine and indeed copy for my website. These included some photographs of Alf Nicholls and some of his comrades from the Royal Warwick's and later from the King's Regiment in India. There were also letters and communications from several of the men who had been held prisoner at Rangoon Central Jail alongside Alf. One fellow POW, Sandford Arthur Lissenberg, known to his friends as 'Lissy', had kept in close touch with Alf and Kathleen, sending them various photographs of the jail during those final days before liberation and complete with useful explanatory notes.

NB. Sub-Conductor S.A. Lissenberg (an Australian) had served in the Indian Army as part of the Ordinance Corps and had temporarily escaped the clutches of the Japanese in early 1942, when he and six other men attempted to reach India in a small boat from their base in Sumatra. Having successfully navigated their way into the Bay of Bengal, a violent storm washed the hapless craft against the Burmese coastline and the men were captured.

Seen below are some of the many images and photographs mentioned above. Please click on any image to bring it forward on the page. Also included in the Gallery is the front cover of the programme celebrating the 40th Anniversary of the Far East Prisoners of War organisation. The POW's from Rangoon Jail had their own smaller association and held many meetings and get togethers over the years, including travelling to America on occasions to visit the many USAAF personnel who fell into Japanese hands after being shot down over Rangoon in 1944 and 1945.

I would like to take this opportunity to thank Kathleen and Kevin Nicholls for all their help in bringing this story to these website pages and for allowing me to include the various photographs from Alf's collection. 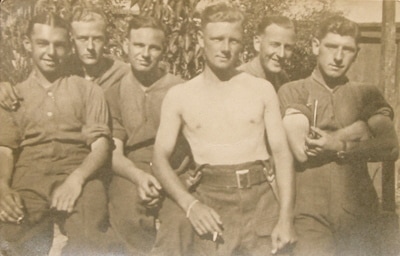 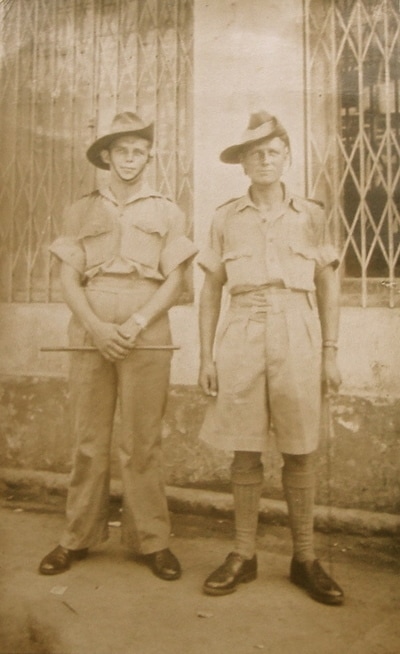 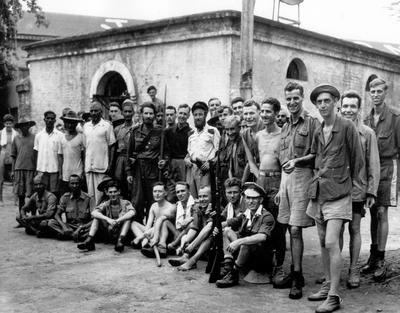 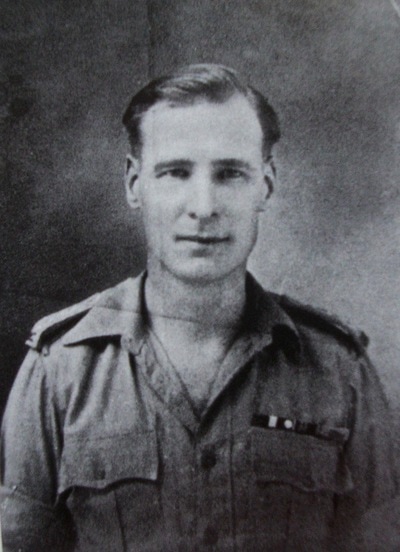 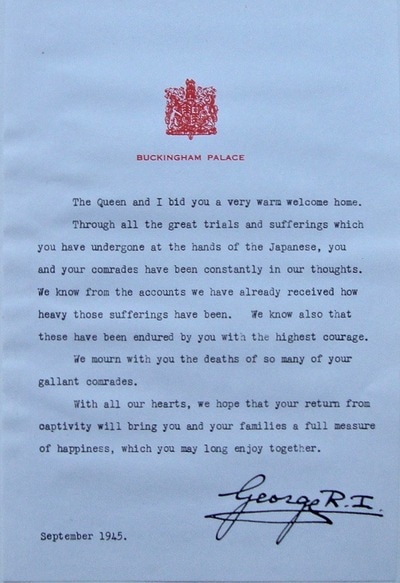 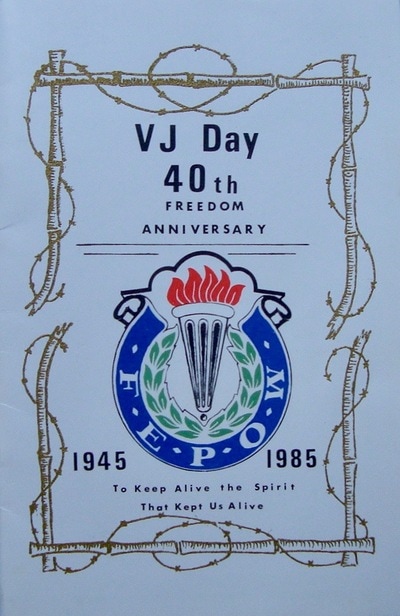 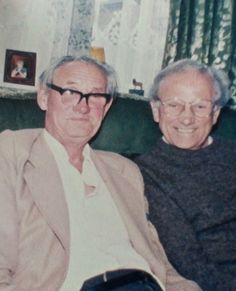 I was extremely pleased to receive the following mini-biography of Alfred Nicholls' life from his wife Kathleen, and sent alongside this narrative, a most wonderful photograph of Alf and his best mate Norman Fowler taken sometime in the 1980's. Please click on the image to bring it forward on the page.

​Alfred Nicholls was born on the 15th June 1915 at Hospital Street in Birmingham; he was the son of Edward and Katherine (nee Thomas) Nicholls and the youngest of eight children. In 1935, when he was about 20 years old the family moved to the newly built Cartland Road in Strichley. After working at various different jobs, Alf eventually settled and went to work for Cadbury’s and it was from here that he was called-up in 1939 after war broke out.

​His wartime exploits are already covered by your own research, so I won't go into these here. We met while he was still on sick leave after having a double hernia operation in April 1946. After recovering from the operation, he did not return to work at Cadbury’s and went to work for Callender’s Cables instead, laying out street pipes. Apparently, when he went to find a new job, they asked him what his last job was; he answered facetiously “grave digging.” So they offered him a job at Lodge Hill Cemetery. Anyway, we married in May 1947 and lived in rooms for seven years with our two children, then moved to a house in Selly Park. Alf returned to work for Cadbury’s, from where he retired aged 61. Sadly, he passed away on the 18th June 1991.
Copyright © Steve Fogden, June 2017. This story is dedicated to Kathleen Nicholls who passed away in April 2019.