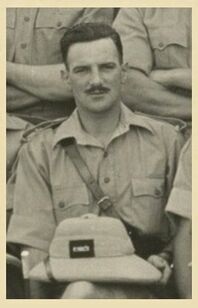 Harold Blackburne in India (1942).
According to the pages of the London Gazette, 2nd Lieutenant (120668) Harold Blackburne was commissioned into the East Lancashire Regiment on the 5th March 1940. He was posted to the 13th Battalion of the King's Regiment and served with the King's in their role as a coastal defence unit during 1941. Harold voyaged to India with the 13th King's aboard the troopship, Oronsay, leaving Liverpool Docks on the 8th December 1941 and arriving at Bombay on the 21st January 1942.

The 13th King's were handed over to Brigadier Wingate in July 1942 and travelled by train to the newly formed Chindit training camp at Saugor, in the Central Provinces of India. Harold was posted to be the Signals Officer and the original Adjutant for No. 7 Column at Saugor, under the overall command of Major Kenneth Gilkes. During his time with the King's Regiment and most probably well before this time, Harold was known to his Army comrades as Blackie.

NB. The position of Column Adjutant was given over to Captain Leslie Cottrell by the time of Operation Longcloth, with the view that one officer could not hold down two important posts at the same time on active duty, thus leaving Harold to concentrate on his role as Column Signals Officer.

For most of the the journey through the jungles of Burma in 1943, No. 7 Column had kept close to Wingate's own Brigade Head Quarters, protecting and shadowing their leader wherever he went. By late March 1943, many of the men from No. 7 Column were suffering from severe exhaustion, starvation and numerous other afflictions common to the jungles of Burma at that time. After a failed attempt to cross the Irrawaddy River as one body on the 29th March 1943, the Brigade split up into individual dispersal groups.

Major Gilkes decided to exit Burma by travelling east through the Kachin Hill tracts and then entering the the Chinese border province of Yunnan. The logic behind his decision, was that once over the border the Chindits were unlikely to be troubled by the Japanese, although this journey would be much longer than the most direct route back to India. The other major concern for the column was the ability to receive supply drops from the RAF and obtaining local guides to lead them from one Chinese village to another. In the end, Gilkes and his senior officers managed to get their men out successfully, having marched through northern Burma and into China, finally reaching the town of Paoshan (Yunnan) in early June. From here they were to have the good fortune to bump into United States Air Force personnel and be flown back to India aboard USAAF Dakotas.

​To read the full story of No. 7 Column's Chindit odyssey in 1943, please click on the following link: Captain Leslie Cottrell 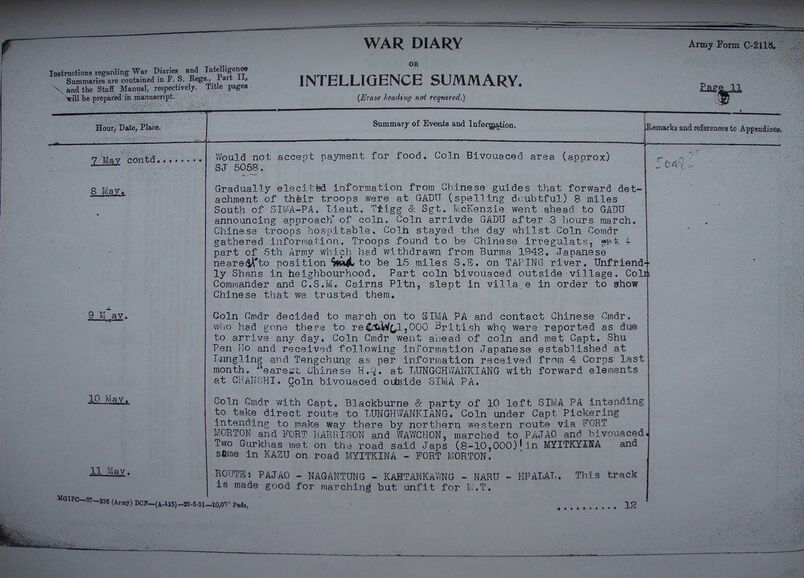 Page from the War diary of No. 7 Column, following their progress through the Kachin Hill tracts of Burma.
​Even at Paoshan, Harold Blackburne continued with his signalling duties, sending messages to India Command informing them of the column's whereabouts and intended plans to fly back to Assam in the coming days. He was also given the responsibility of making contact with other Chindit dispersal parties known to be in the Chinese borders.

In a paraphrased letter dated 9th June 1943 and addressed to Lt. P.A.M. Heald of No. 5 Column, Harold writes:

I am damned if I know where you are, but if you are within 20 miles of here (Paoshan), when this letter reaches you, you simply must make it here as I have waited for you for 4 days. The rest of the column (No. 7) departed eight days ago and are now in India and the lorries have returned for myself and the rear party and have orders to return without you if you are not here within 24 hours. For three days I have tried in vain to obtain news of you and have now been vaguely told you are about 12 miles away. So, I am taking a chance and dispatching this message by (Chinese) cavalry messenger. Please get here tomorrow at all costs and you will receive a shave and haircut, a bed and some clothes (of sorts); if you do not make it I will have to make other arrangements for you because the rains are due and landslides are common. All arrangements are in the hands of a Captain from the British Embassy who has been with us for a while now. 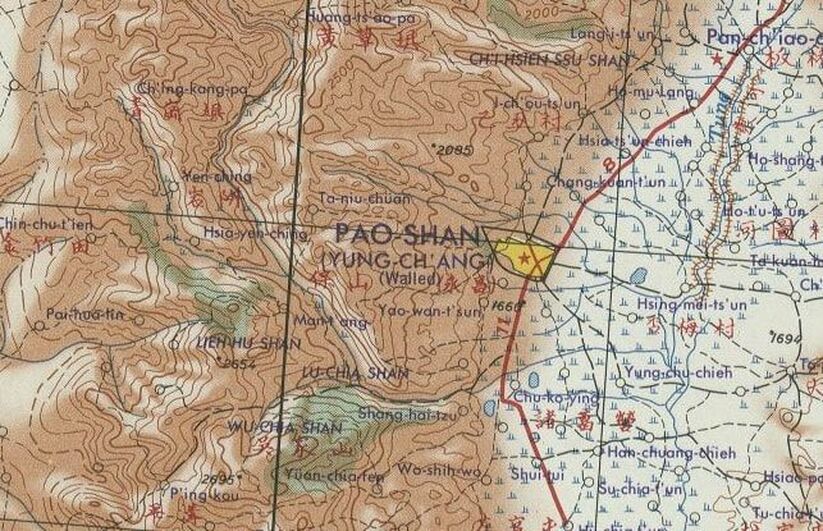 Map of the area around Paoshan in the Yunnan Province of China.
​Post Operation Longcloth and after a lengthy period of rest and recuperation, the surviving soldiers of the 13th King's eventually reassembled at their new home, the Napier Army Barracks in Karachi. Here they settled down in the performance of garrison and internal security duties in the Sindh District of India, now part of present day Pakistan.

In October 1943, Harold was called for an interview with GHQ and offered a promotion and command of a Special Forces Signals Group, which was about to be dropped by parachute into Burma to secretly report on Japanese positions and movements. In the end Harold did not take up this opportunity, stating that he had only just returned from an extremely hazardous and energy sapping operation in the form of the first Wingate expedition.

After 14 more months with the 13th King's at Karachi, on the 21st February 1945, Captain Blackburne was transferred to the Royal Engineers, with whom he would serve for the rest of his Army career. After the war, Harold served with the British Army of the Rhine, whose original function was to control the Corps Districts which were running the military government for the British Zone of occupied Germany. After the formation of a civilian government the B.A.O.R. became the command structure for the military only and gave up the responsibility of overseeing any civil administration. Harold Blackburne retired from the British Army in 1959.

Harold was a great supporter of the Chindits Old Comrades Association, at one point holding the position of Honorary Treasurer for the organisation. He also acted on occasion as Standard Bearer for the Old Comrades Association, including at the unveiling of the Wingate Memorial Tablet in the chapel of Charterhouse School. The Chindit Standard was used at all memorial functions and Chindit gatherings, it was finally retired (laid up) in 2009 and now rests at Lichfield Cathedral in Staffordshire.

In January this year (2019), I was delighted to receive an email contact from Anthony Blackburne:

I have recently discovered your Chindit web page and have found it very informative. My father was Captain Harold Blackburne who according to the site served with column 7 on Operation Longcloth. He died at the age of 53 in August 1959 having only just retired from the Regular Army. The main reason for my contacting you, is to confirm the caption on your page showing him as the Standard Bearer at the Charterhouse School unveiling ceremony.

Although I was only nine years old when he passed away, from discussions with my brother Philip and having looked through my father's Army records, I can tell you that he served with the BOAR and was also posted to Gibraltar, where he was accompanied by his family. Also included in his documents, was a sheet of headed letter paper for The Chindits Old Comrades Association showing my father as the Honorary Treasurer at that time. I would like to take this opportunity to thank you for devoting your time to keeping the memory of the Chindits alive. As with so many of these things memories get lost overtime and it's important to preserve our history. Regards Tony.

Seen below is a final gallery of images in relation to this story, including the photograph of Captain Blackburne at the unveiling of the Wingate Memorial at Charterhouse School. Please click on any image to bring it forward on the page. 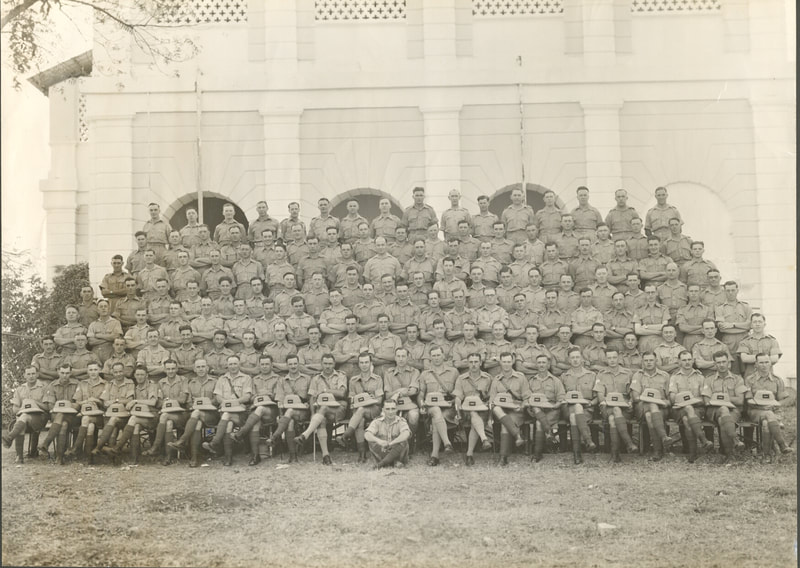 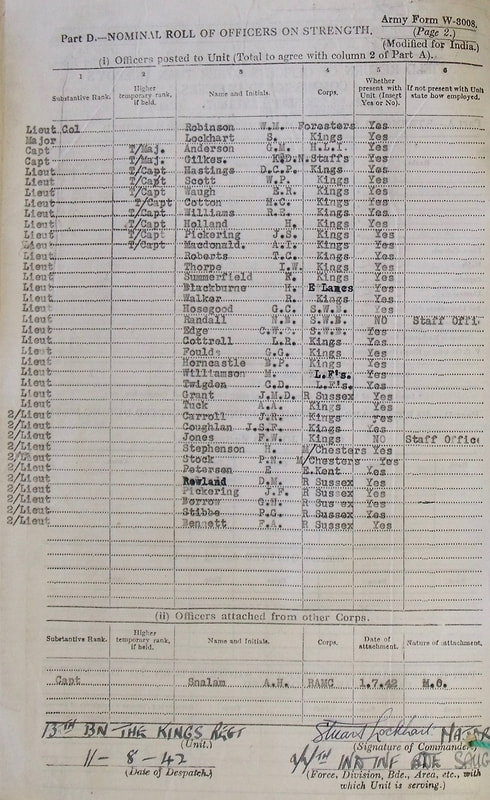 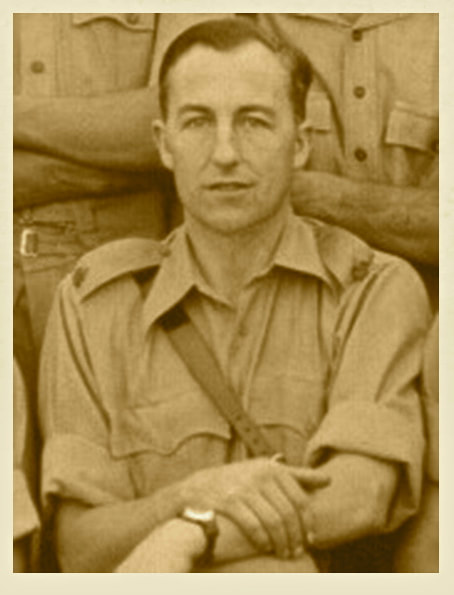 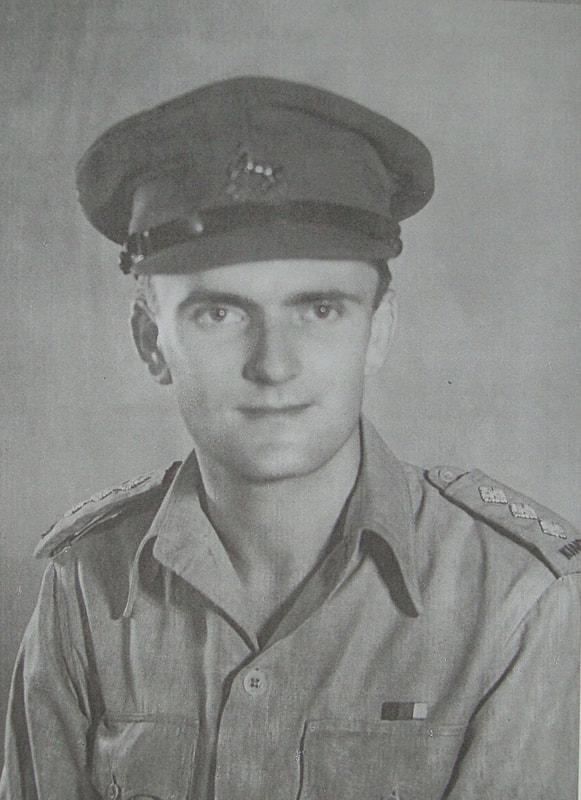 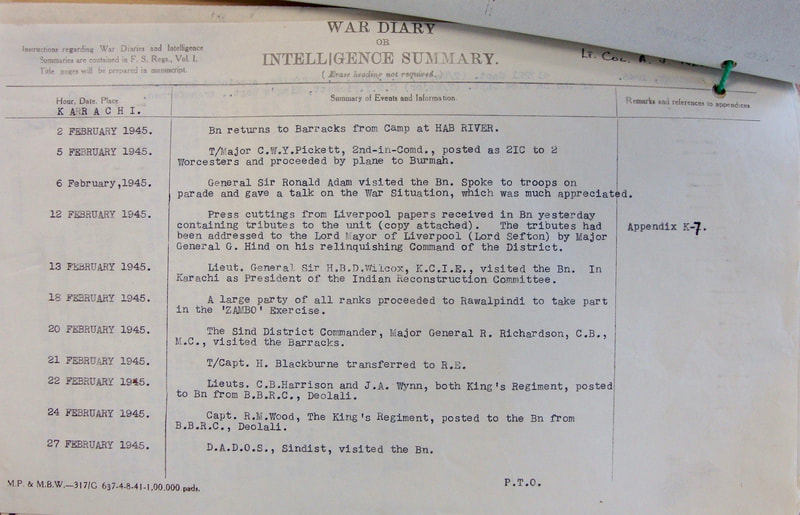 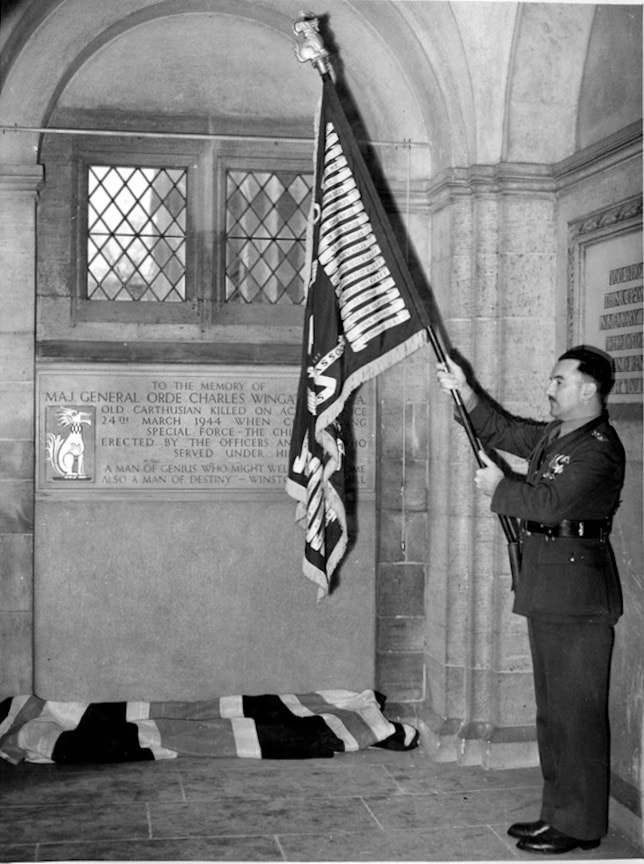