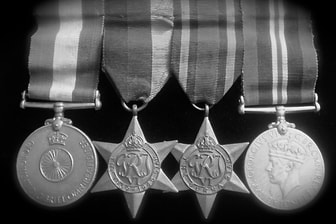 Gurkha medals from WW2.
Sancharbahadur Rai was a last minute reinforcement for Operation Longcloth, coming over to the Brigade in late 1942 from his parent unit of 10 GR. He was trained as a muleteer and that was to be his role in Burma.

Sanchar was a member of Column 1 in 1943, of this I am quite sure. From his testimony below we can tell his unit simply from the places and people he mentions. The seemingly ever-present 'Weatherall sahib', the actions at Mong Mit, the Irrawaddy crossing and the Mu River.

Column 1 was commanded by Major George Dunlop MC of the Royal Scots. Dunlop had been unhappy during the course of the operation about the role played by his column and the 3/2 Gurkhas in general. He was suspicious about Wingate's plans for his men and worried that they were being used as a 'sacrificial lamb' (his own words) to deflect the Japanese away from the Northern Group as they exited Burma in April 1943. And so it was, that when dispersal was finally called Column 1 found themselves the furthest east of all the Chindit units.

I was posted to 3/2 Gurkha Rifles for Chindit work. I looked after a mule.  One mule between four men was issued to carry rations. We moved to the Naga Hills, taking five days and then reached Manipur. We were given money, 4 anna pieces and another coin with a head on it. We moved off for another four days and had to cross over the Chindwin River in inflatable boats with the mules. After another few days we crossed the Mu River for the first time.

A Burmese Major taught us not to leave off eating salt and to eat any green foliage that animals also ate. At Mongmit we were surrounded by the enemy and were told to make it back to the Irrawaddy. We were very hungry. We stripped our weapons, mortars, machine guns, everything and abandoned them, throwing away the bolts and springs. We kept a couple of grenades each. We were ordered to strip the mules and abandon them also. They followed us for five days, whinnying all the time.

NB. Sanchar has moved on very quickly with his account of the operation. At this point Column 1 had crossed the Irrawaddy River and were marching eastwards on the Myitson/Mong Mit Road. It was in this area that they were first attacked by the Japanese.

One Japanese Brigadier showed us kindness. He let us out of an encirclement as we made our way to the next river and then ordered his spotter aeroplane to fly him back. There's no doubt about it, teaching us how to use the Pole Star during recruit training was of great use. Each evening we would look at it to get our bearings for the next day. We made our way back towards the Irrawaddy.

Weatherall sahib was with us then, he was the best. He spoke to us as one of us. He said that we ought to be able to move 30 miles a day but we had no food so we did not move very fast. "I'll get you to the Chinese in two days and then, by air, we'll fly to Manipur," he told us. If only we'd had a full stomach. But we felt as if we'd die as we were only eating grass.

NB. The mention of the Japanese Brigadier is interesting. From Mong Mit the Chindits had been constantly pursued by the enemy, who were never more than a few miles behind. After a particularly violent action at the foot of some high ground the Japanese suddenly withdrew giving the ailing Gurkhas the chance to climb the hill and escape. I wonder if Sanchar is referring to this instance when he mentions the Brigadier and his aeroplane? 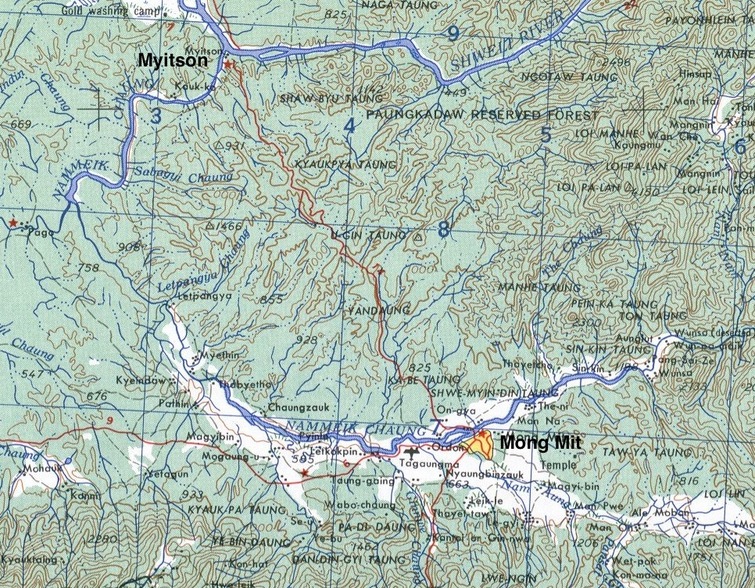 The area around Mong Mit, showing the Myitson Road in red and the Shweli River to the north.
After this engagement the column moved away directly eastwards for a period, it was approximately the 2nd of April. They then changed direction in order to throw the Japanese off the hunt. It had now been nearly two weeks since they had received an air-supply drop and the men were weakened by hunger. One of Sanchar's superiors, Subedar Siblal Thapa recalled: "We had eaten little but leaves and shoots for nearly a week. My stomach was beginning to think that my throat was cut!"

Eventually the column returned to a more northerly bearing and headed toward the Shweli River. Sanchar takes over the story once more:

On reaching the Shweli River we cut bamboos to cross over. Ten Burmese pulled us and 12 pushed us. British machine guns fire slowly, "trk, trk, trk, ra, ra, ra": German and Japanese guns fire very fast, "trrrrrrrrr". Twelve of us were halfway across when the Japanese opened us on us, "trrrrrrrrrr". The bamboo raft overturned and many died. Only a few survived. What were we to do and where were we to go?

NB. It was now April 10th. Sadly, it was at this point that Major Weatherall was killed. Please click on the link below for more information about this incident, which forms part of Ramkrishna Limbu's testimony:

A Burmese Major went back toward the river and the Japanese cut him to pieces, taking his head off. The river ran red with blood. We had an air drop of hard tack rations to last us for five days, biscuits and tea, but not much of either. We were in the middle of brewing up that evening when we were attacked by Japanese aircraft. We scattered.

By then there were only about 300 of us left. We reached the Irrawaddy. We had five Burmese with us and, dressed as civilians, they went and searched for boats. They brought back two, one that held fifty men and one that held thirty. In single file, I in front, we got into the larger boat at dawn. We got over. In broad daylight the Japanese opened fire on the boats on the second trip over, "trrrrrrrrr". The current took boats and men downstream. Crocodiles, or big fish, gobbled up the bodies, live and dead, like chickens pecking insects.

With a few others we continued on our way. We licked salt and ate grass. Like monkeys, we shat green. Our heads were very heavy. Indeed, it is true as one British Officer had said earlier, 'Gorkbaliko gidi, gborako lidi' or "Gurkhas brains are as heavy as horse dung." It was only with the greatest difficulty that we staggered on, our heads hurting. Eventually we survivors crossed the Mu River.

NB. At the crossing of the Mu River there was another clash with the enemy and it was here that the Southern Group Commanding Officer, Lieutenant-Colonel Alexander was killed. Please click here for more information:

By then I was with three friends, one of whom was a Signaller from Abbottabad. When we got to the Chindwin we were fired at from across the river by our own troops who took us for Japanese. My Signaller friend took off his shirt. It was filthy, full of lice and ragged. He stuck it on a piece of wood and sent a message. On the other side was 3/5 GR. Firing stopped and a message came back: "Stay there all day and we'll come and fetch you after dark."

So we stayed there all day and were fetched over after dark. We were told not to eat too much, only a mouthful or we'd die. Next morning we were given new clothes, told to eat a little more and our heads were shaved. The third day we had to move on. What should have been a four or five hour walk took us two days, we were so weak. We got to a road and were taken to Imphal in Manipur. Then we were sent home to Debra Dun. 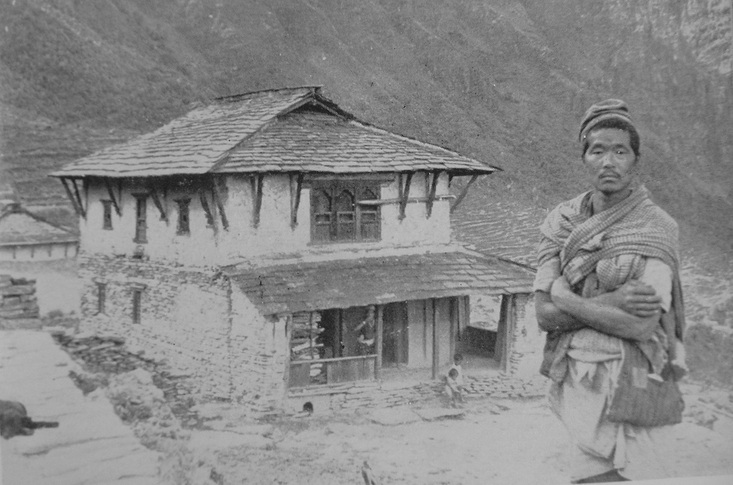 A Gurkha Rifleman at home in Nepal.
My great thanks go to John P. Cross for permission to use the testimony of Sancharbahadur Rai from his book 'Gurkhas at War'.