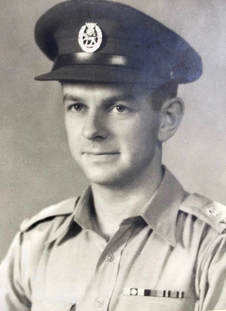 James Charles Bruce.
James Charles Bruce was commissioned to the General List (Regular Army) as 189617 2nd Lieutenant (Emergency Commission) on the 28th April 1941. He became a War Substantive Lieutenant on the 12th December 1941, whilst serving with the 4th Burma Rifles. After a short period with the Composite Burma Rifles Battalion in India during 1942, he was promoted to the rank of Temporary Captain with the 2nd Battalion, Burma Rifles in the lead up to Operation Longcloth.

Just prior to the first Wingate expedition into Burma, Charlie Bruce, as he was known to his closest friends was asked to lead a section of Burma Rifles across the Chindwin River, in order to ascertain the lay of the land in regards to potential supply dropping locations and to see how the locals might react to the having the British back amongst them. To read more about this mission, please click on the following link:
​Pre-Operational Reconnaissance

​On Operation Longcloth proper, Lt. Bruce was part of the Burma Rifles Head Quarters with Southern Group. This consisted of Chindit columns Nos. 1 and 2 and a Group HQ led by Lieutenant-Colonel L.A. Alexander of the 3/2 Gurkha Rifles. Southern Group crossed the Chindwin River on the 15/16th February 1943 at a place called Auktaung. Their role was to act as a decoy for the much larger Northern Group, which included Wingate's own Brigade Head Quarters and columns: 3, 4, 5, 7 and 8.

​Southern Group's role as decoy, marching openly along well known tracks and jungle pathways and taking supply drops in paddy fields close to Burmese villages, was meant to take the heat off Northern Group as they moved quickly to their own objective, blowing the Myitkhina-Mandalay railway at Bonchaung and Nankan.

The Burma Rifles HQ led by Captain George Carne and ably assisted by Charlie Bruce, were continuously sent ahead of Southern Group, scouting the tracks and trails for signs of the Japanese and testing the demeanour of the local villages. On one occasion, Bruce led a small detachment of Burma Riflemen across the Irrawaddy River and into the town of Tagaung.

We walked into town and met around 30 Burmese who were fighting on the Japanese side. I told them they were foolish to fight for the Japanese and pointed to the sky and said I would call in bombers to destroy them if they continued to resist. Just then 12 of our bombers came roaring overhead, they did not know I was below them and I didn't know they were coming, but it was enough for the Burmese to throw down their weapons and plead for mercy.

Lt. Bruce and his platoon then blocked river traffic on the Irrawaddy for over five days which caused great embarrassment for the bemused and by now panicking Japanese. As the enemy hunted for the Chindits, they began to wonder if the British presence in the area might be the beginning of the Allied re-invasion of Burma. As a result, the Japanese Generals strengthened their numbers in the region between the Chindwin and Irrawaddy Rivers, which curtailed any plans they might have had themselves.

Bernard Fergusson also mentioned Lt. Bruce and his action at the Irrawaddy in the book, Beyond the Chindwin:

The adventures of Captain George Carne and Lieutenant Charles Bruce, both of the Burma Rifles attached to No. I Group, are worth recording. Charlie Bruce had been sent on ahead, before No. 2 Column got into trouble, to seize a village on the Irrawaddy, and capture all its boats. He occupied the village with six Burma Riflemen, and held it for some days before he heard from local gossip what had happened to No. 2 Column.

NB: No. 2 Column had been ambushed at the railway town of Kyaikthin on 2nd March and had suffered heavy casualties. The commanding officer, Major Arthur Emmett then called dispersal and took most of his remaining men back to India. A group of approximately 100 soldiers from 2 Column did not receive this order and continued eastward toward the Irrawaddy. This group eventually joined up with No. 1 Column under the command of Major George Dunlop.

During his stay in the village, he (Lt. Bruce) disarmed the local police, who had been armed by the Japs; sank with tommy-gun fire a boatload of Japs, whom he dispatched; and made a remarkable propaganda speech. He had just said, "I can call great Air Forces from India at will," and thrown his arm in the air with an extravagant gesture, when he suddenly heard, far away behind him in the west, the droning of air-craft. He remained with his arm in the air, like Moses when he was dealing with the Amalekites; and six British bombers flew slowly over his head, in the direction of Mandalay. "What did I tell you", said Charlie, recovering himself.

From then on he was a made man. Hearing at last that his column had been ambushed he joined up with Captain Carne. They crossed the Irrawaddy; it was they who occupied the Rest House at Yingwin when 5 Column was at Pegon. After many exciting adventures, they arrived, in India, early in April. Both received the Military Cross.

Seen below is a gallery of maps showing Southern Group's advance from the Chindwin to the Irrawaddy River at Tagaung. Please click on any image to bring it forward on the page. 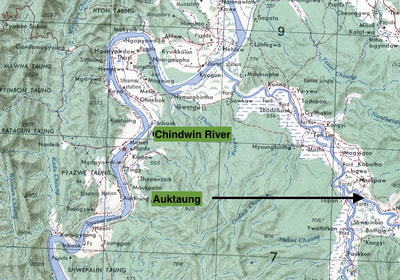 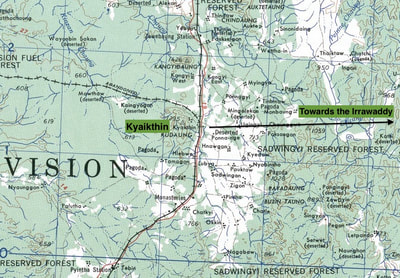 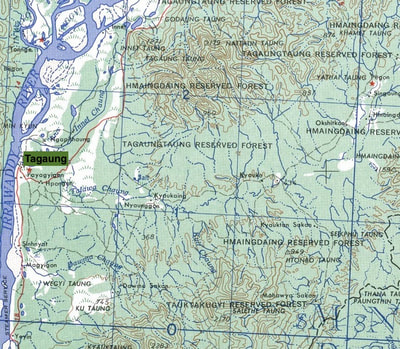 As mentioned in Bernard Fergusson's account, Lt. Bruce was awarded the Military Cross for his efforts at the Irrawaddy during the first week of March 1943:

Action for which recommended:

On 28th February 1943, Lieutenant Bruce was sent forward to arrange for the crossing of the Irrawaddy River by Headquarters No.1 Group, including No.1 Column and No.2 Column. He was accompanied by one section of Burma Rifles. Reaching the Steamer Station of Tagaung, with his small force he blocked the river preventing the movement of all traffic, and held the area for four days. On the 3rd March he entered the town accompanied by only four men, disarmed the local Burma Police Force, destroyed seven rifles and kidnapped a Burman Customs Official who was a Japanese nominee.

​Owing to his efficient block of the river he was able to collect a large number of river craft and great quantities of food, sufficient to feed the whole force of 1,000 men for several days. Unaware that part of the force had been ambushed at Kyaikthin and with the plan now changed, Lieutenant Bruce continued with his inadequate party to hold the area far beyond the period originally ordered. Hearing at last of the fate of the main body, he finally abandoned the position which he had so boldly held and, rejoining his Platoon Commander (George Carne), took part with him in a remarkable march across the Irrawaddy through the Kachin Hills and eventually back to India. During the whole period his courage, cheerfulness and unfailing sense of humour was a remarkable source of inspiration.

Seen below is another gallery of images in relation to this story. Please click on any image to bring it forward on the page. 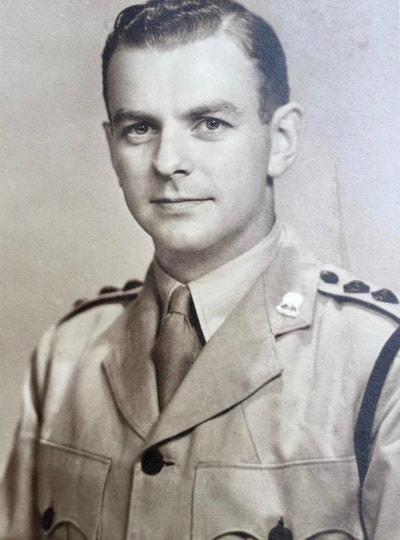 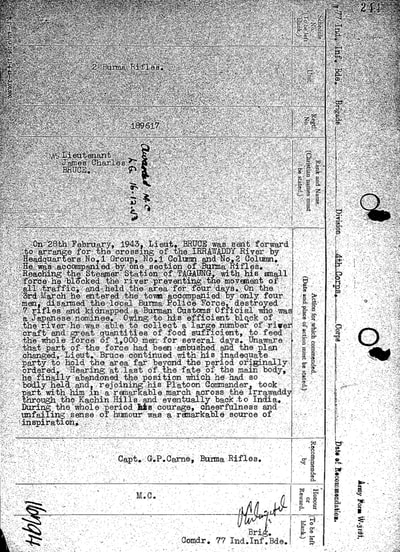 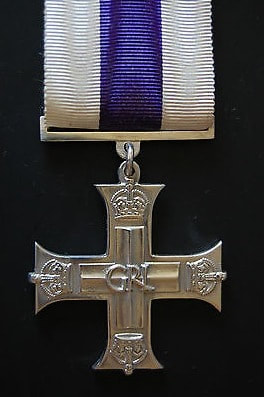 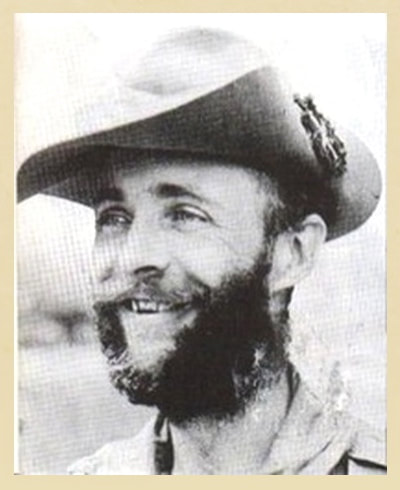 After a period of rest and recuperation from their exertions on Operation Longcloth, the men of the 2nd Burma Rifles reassembled at Jhansi in the Indian state of Uttah Pradesh. As preparations began for the second Wingate expedition, many of the men from the battalion were offered places in the five newly formed Chindit Brigades. On the 30th November 1943, Captain J. C. Bruce was sent with a small cadre of Burma Riflemen to a place called Dukwan, where they engaged in specialised training presumably in preparation for Operation Thursday.

In February 1944, Captain Bruce was posted to the 2nd Battalion, the Yorks and Lancs Regiment at their training camp in Deogarh. The battalion were to form Chindit columns 65 and 84 as part of the 14th British Infantry Brigade commanded by Brigadier Tom Brodie. Charlie Bruce, by now an Acting Major, became No. 65 Column's second in command behind Lt.-Colonel B.S. Downward. During a hectic and fast-moving campaign, he was involved in reconnaissance duties, demolitions and several engagements with the enemy. In early June, Colonel Downward contracted scrub typhus and was very much against his will, evacuated by air back to India. For the rest of the campaign the leadership of 65 Column fell to Major Bruce.

​For his considerable efforts during the second Wingate expedition, Major Bruce was awarded a bar to his Military Cross. The award was recommended by Colonel P.H. Graves-Morris, commander of the 2nd Battalion of the Yorks and Lancs Regiment in 1944 and was signed off by Major-General W. Lentaigne, commander of Special Force.

The citation reads (paraphrased due to the illegibility of the original document):

Major Bruce became commander of 65 Column after the evacuation of Major B.S. Downward. He had previously carried out the duties of Staff Officer in a most enthusiastic way. His knowledge of Burma and the workings of Long Range Penetration was a great asset to both columns. At Bonchaung on the 15th April 1944, Major Bruce was in command of two platoons and the transport echelon. His careful dispositions and manoeuvring of the troops under his command repulsed enemy attacks on the bridge (BM 453) and subsequently on the bivouac area.

Whilst operating under his command the Column successfully cleared Hkawan village and carried out successful operations in clearing the track between Hkawan and Nagusharawng on the 18/19th July 1944. Here he encountered the Japanese six times, killing one officer and four other ranks. Throughout this operation Major Bruce's personal leadership and determination to reach Nagusharawng were a splendid inspiration to his tired troops. He accompanied the leading section forward to discover the next Japanese position and then, under fire, directed operations until the enemy were evicted.

During the battle for Point 1497, Major Bruce's active control of phases of the battle largely contributed to its ultimate success. Besides constantly visiting the forward elements of his force, he personally directed the firing of the mortars. Throughout the campaign his cheerful personality has been fine encouragement during difficult conditions of both country and weather and his outstanding qualities as a leader, have been responsible for maintaining a fighting spirit in the column under his command, which lasted right through until the end of the campaign. His tireless enthusiasm for each new venture has been a splendid tonic and inspiration to all and is deserving of special mention.

Seen below is a final gallery of images in relation to this story. Please click on any image to bring it forward on the page. I would like to thank Major Bruce's son, Robert, for sending me the excellent photographs of his father and for supporting both myself and this website. 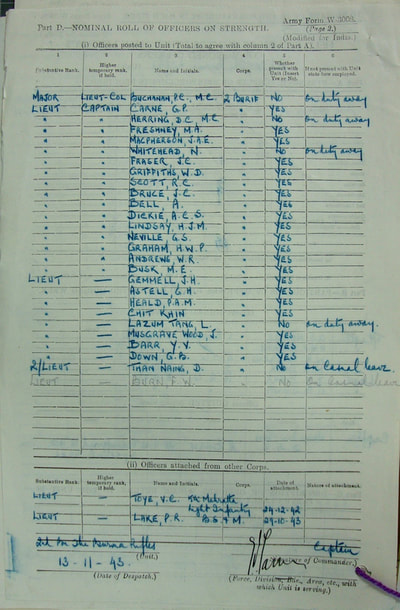 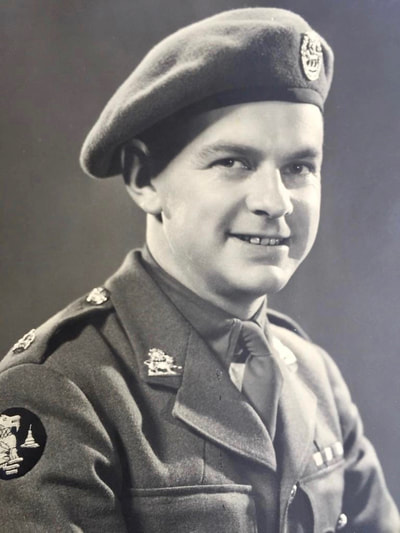 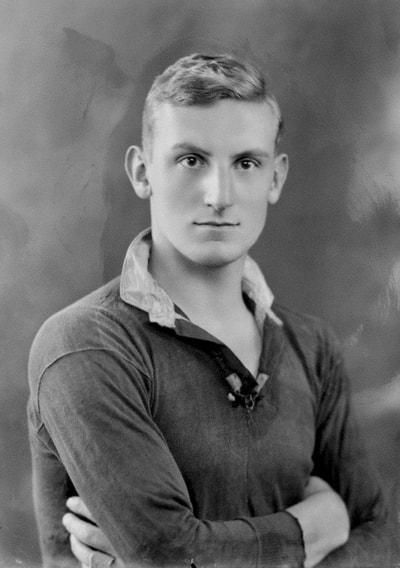 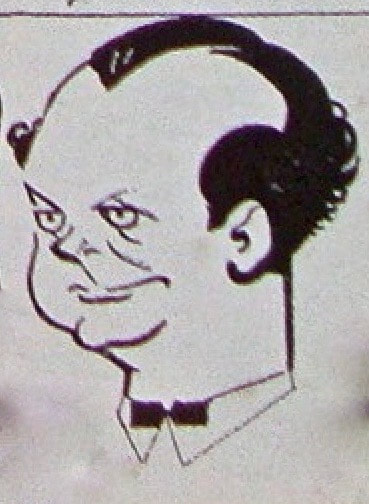